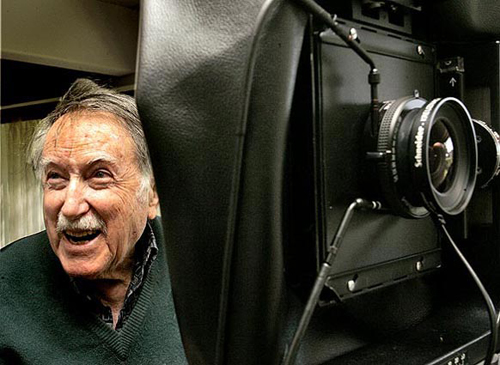 Charles and Ray Eames, Pierre Koenig, John Lautner, Richard Neutra, Rudolf Schindler, Raphael Soriano, Frank Lloyd Wright. An impressive client list, to say the very least. These icons of modern architecture compose the oeuvre of Julius Shulman, who spent his career chronicling their visions through the lens of his camera. Besides bringing these architects’ projects to the public eye, Shulman also helped to keep them vivid across the passage of time.

Born in Brooklyn, New York, in 1910 – 10/10/10, to be exact – Shulman moved to Los Angeles with his family as a boy. At 19, he entered the University of California, Los Angeles, and audited classes for four years. In 1933, for his 23rd birthday, he received a Kodak Vest Pocket camera and set off for Berkeley. “I bummed around, taking pictures of campus buildings,” he said. “Nothing then indicated a professional interest in photography.”

All that changed upon Shulman’s return to L.A. in 1936 – when kismet playing a major role. Not only was Shulman’s sister Shirley neighbors with Neutra, but his apprentice was also renting a room in her house. “Who’s Mr. Neutra?” I remember asking the man,” said Shulman, who’d never met an architect before.

He got his answer at a recently-completed Neutra residence in Laurel Canyon, where he set his Vest Pocket on a tripod and took six pictures. After the architect saw the 8-by-10 prints, he immediately referred Shulman to colleague Raphael Soriano, who was building his first house. “I had my first two clients in one day,” Shulman recalls.


His early images adhered to the same principles that remained in his photography. Composition was based on the juncture between two diagonals or dynamic symmetry. To cross-light interior views, he used strobe supplements, never umbrellas.

in December 1999, appearing as fresh as ever.

Exhibitions of his work, too numerous to count, span from the 1940s. The Craig Krull Gallery in Santa Monica, California, was his exclusive representative, and the roll call of worldwide shows included the Photographers’ Gallery in London, the Stefan Vogdt Galerie der Moderne in Munich, Galerie Thierry Marlat in Paris, the Stephen Wirtz Gallery in San Francisco, and Yancey Richardson in New York.

Although Shulman “retired” in 1989, with the advent of postmodernism, he remained busier than ever, working on several books. He took up his camera again to shoot Jose Rafael Moneo’s Cathedral of Our Lady of the Angels in L.A. At Woodbury University’s School of Architecture and Design in Burbank, he was involved in establishing the Julius Shulman Institute, aiming to analyze housing needs and ultimately create built projects.

Shulman was also an honorary member of the American Institute of Architects and the recipient of a lifetime achievement award from the International Center of Photography, New York. What was this multigenerational hero’s advice to the current crop of young architects? “Don’t use anything your client won’t understand,” he declared. “Avoid theatrics.”