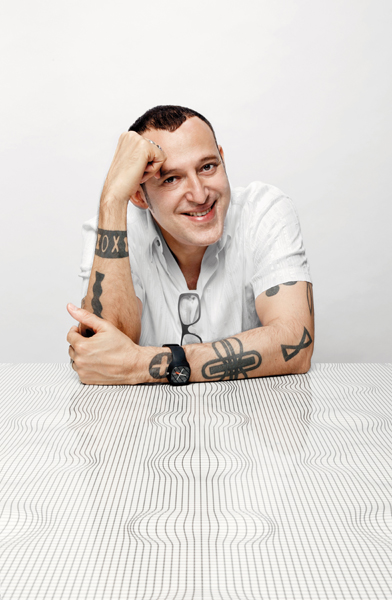 Anyone who doesn’t know

must be living in a bubble. And chances are that

designed that bubble, too. He is probably the most prolific industrial designer working today. Here’s the count: 3,000 objects in production, with more than 50 clients in 40 countries. Some of the product types are expected: seating, lighting, bath fixtures and fittings, ceramic tiles. Other items are more idiosyncratic: the ubiquitous Garbo trash can, the Bobble water-filtering bottle, the clever Dirt Devil Kone hand vacuum. Clients range from Alessi, Artemide, and Cappellini to Samsung, Swarvoski, and Veuve Clicquot.


Karim is not, however, object-bound. Taking a holistic approach, he’s equally gifted at branding and exhibition design. And let’s not forget interiors. In just over a decade, he has completed 63. His first was Morimoto, chef Masaharu Morimoto’s restaurant in Philadelphia. The Semiramis Hotel in Athens and the Silk Road restaurant in Las Vegas have followed.

has recently been elected to design several real estate developments in New York City for HAP Investments, the first of which is slated to open in spring 2015


A global citizen, Karim was born in Cairo and spent early years in London, where he discovered his flair for drawing. Hard to believe it, but this polished and gregarious adult claims to have been a timid child. He spent time hiding under his parents’ bed, sketching from that vantage point—shoes were a favorite subject. His talent was validated at age 5 when he entered an art contest onboard the ship that was taking his family to a new home in Toronto. Everyone else drew landscapes or people. He drew suitcases. Realizing that everything we use and consume starts with design, he enrolled in the undergraduate industrial-design program at Carleton University. After graduation, the Canadian government gave him a scholarship for graduate studies at the Associazione per il Disegno Industriale, located in design’s mecca, Milan. Now he has a New York studio of 20. Home is the effervescent pink Manhattan loft that he shares with his wife, Ivana, a Serbian chemical engineer—at least when he’s not traveling. He spends roughly 180 days annually in Europe, the Middle East, and Asia.


As the son of a painter,

makes a clear distinction between art and design. The former is one-off, the latter mass-produced—no gray area. But that doesn’t mean that a single person can’t create both. He has exhibited his digital art at the Gering & López Gallery in New York, Galleria Colombari in Milan, and Galeria Luisa Strina in São Paulo, Brazil. His prolificacy extends to publishing, too. In seven books, he has propagated his manifesto: “My work, from micro to macro, is about communicating and touching our contemporary lives.” A eighth book, a career retrospective monograph, is on the way. As diverse as his output is, consistent threads connect it. Products and projects have an organic quality, a sense of optimism. Typically, color runs rampant. It should come as no surprise that he counts Alessandro Mendini as a friend and mentor and held Ettore Sottsass in similar high regard.


Karim chosen a different career, he might have been a DJ or perhaps a couturier, bringing his signature white or pastel suits to others fashion-forward enough to follow in his footsteps. We can promise that no one else has ever worn a baby-pink velvet Dolce & Gabbana blazer to his Hall of Fame induction.