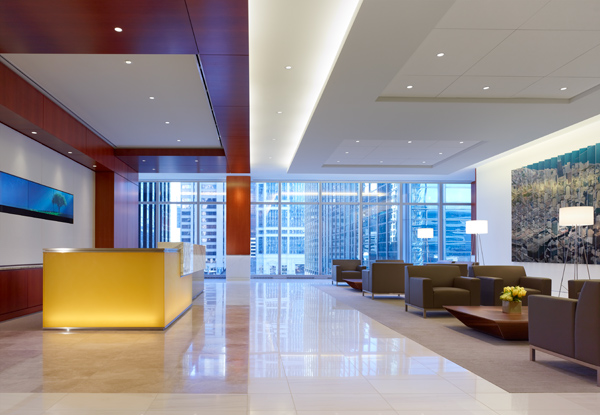 “It’s too expensive” is a common reply when business or property owners talk about renovations to existing buildings, especially “green” improvements. However, the

showing that simple and inexpensive green renovations can deliver a massive payoff in cost-savings. In fact, some businesses surveyed saw annual savings of $.60 to $1.50 per square foot. The catch, says the report, is that “basic is not always obvious.”

Lighting, for example, is one of the more accessible systems, generally sucking up a third of a building’s electrical consumption. So-called overlighting is the most common target, as standards have changed. Twenty years ago, 50 to 100 foot-candles of lighting was normal. Today, 30 t0 50 foot-candles are recommended. A simple retrofit can decrease overall lighting, take better advantage of daylight, and use less energy. Even replacing old wall switches with occupancy sensors can cut lighting expenses by 25 percent.

A building’s mechanical systems are less obvious, mostly because they’re designed to be hidden. The simplest snafus—an exhaust fan stuck “on” or a broken sprinkler head leaking for two years—can cost a company thousands every year. An audit of a facilities mechanical systems will reveal these easy fixes, as well as other areas (heating and air conditioning, for example) that can reduce a company’s bills dramatically.

The report also details how upgrades to a building’s envelope can be integrated into routine rehab. A roof, for example, will need to be replaced every 15 to 20 years no matter what, but adding insulation at the same time will improve the building’s energy efficiency without driving up the construction costs. Energy modeling can be added in to any major renovations—one example shows where window air filtration could be improved without replacing the entire window.

Finally, the report investigates on a more human level: Hired help. A lot of problems in a building will be discovered by encouraging occupants to report issues. Everything from air quality to office layout to pest control can be more efficiently addressed by investigating complaints (and improvements can lead to happier, healthier occupants).

Energy service companies can be a good first-step investment. But so is anyone who is involved with a building: Engineers, tenants, occupants, owners, contractors, vendors. If everyone is on-board and vigilant, huge green additions—and savings—can be implemented.