Listen and Learn: Joel Sanders and Karen Van Lengen Should Run for Office 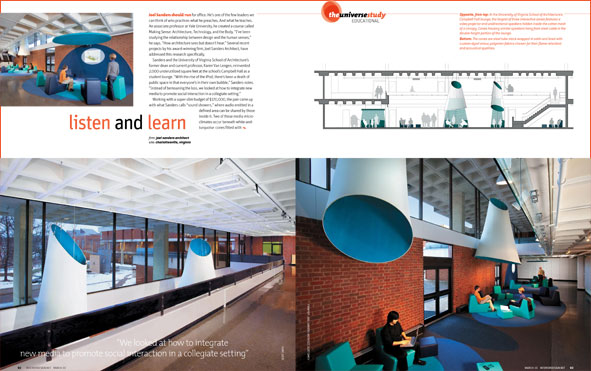 Joel Sanders and Karen Van Lengen should run for office. They’re two of few leaders we can think of who practice what they preach. And what they teach. An associate professor at Yale University, Sanders created a course called Making Sense: Architecture, Technology, and the Body. “I’ve been studying the relationship between design and the human senses,” he says. “How architecture sees but doesn’t hear.” Van Lengen’s research focuses more on the architecture of communication, and she is currently preparing to teach a course devoted to that this fall at the University of Virginia School of Architecture, where she was formerly the dean for a decade and is currently the Kenan Professor of Architecture. Several recent projects by the two firms, Joel Sanders Architect and Karen Van Lengen Architect, have addressed their combined research specifically.

Sanders and Van Lengen reinvented 2,000 underutilized square feet at UVA’s Campbell Hall as a student lounge. “With the rise of the iPod, there’s been a death of public space in that everyone’s in their own bubble,” Sanders notes. “Instead of bemoaning the loss, we looked at how to integrate new media to promote social interaction in a collegiate setting.”

Working with a super-slim budget of $170,000, the pair came up with what Sanders calls “sound showers,” where audio emitted in a defined area can be shared by those inside it. “They came out of my idea of the architecture of democracy,” Van Lengen explains, “and the philosophy of Thomas Jefferson.” Two of the media microclimates occur beneath white-and-turquoise cones fitted with speakers projecting sound from closed-circuit channels. The third and largest one is produced by an elliptical canopy concealing speakers, plus a projector, for shared audiovisual experiences. Ovals of coordinating turquoise carpet indicate the range of the sound zone, from 3 to 12 feet across. Comfy foam seating, upholstered in turquoise or navy blue, invites lounging and listening.