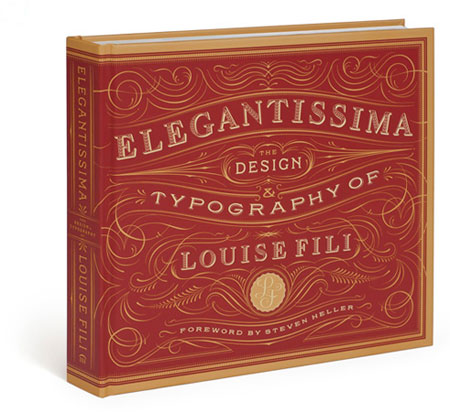 Who knew the still reigning king of book-cover design,

, once had a female challenger? Apparently back in the ‘80s, when print graphic design was the heart of all creative rage (really, kids, avail yourselves of the interwebs to look up

, and a little known artist called

, among others), Louise Fili was quietly making her mark as the art director for Pantheon Books, where she produced some 2,000 jackets. An overview of the best of these—as well as that of Louise Fili Ltd, the studio she founded in 1989—can be found in Princeton Architectural Press’s

. The designer herself collected some 350 examples of her often hand-drawn typography that was used in the service of Sarabeth’s, Jean-Georges, The Mermaid Inn, and the School of Visual Arts. The 256-page monograph is a steal at $40 and a must for package designers and both print and digital typographers.


The author will be interviewed

at the Type Directors Club on September 13. A book signing will be part of the program.