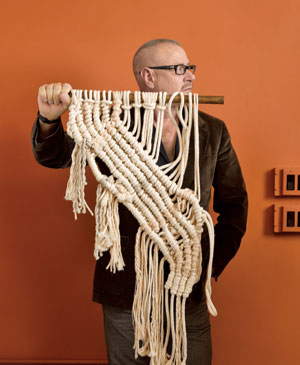 In the famously fickle world of fashion,

enjoys longstanding relationships with some of the most illustrious labels, including

, with whom Sofield has collaborated for nearly two decades. “I joke that I’m not always the first lover, but I’m usually the last,” he says with a laugh. That notion extends to staff, too. His right-hand woman, Emma O’Neill, has worked with him since 1987, back when he was a director at De Marsillac Plunkett Architecture.

in 1996, it has become practically synonymous with the term luxury retail. The firm has also occupied the same landmarked 1889 loft building in New York all those years. “We actually started on the top floor. Every time we moved, we sank,” he continues. “We say that we’ll eventually be street level—and go into the restaurant business.” For now, however, the 40-person staff is happily ensconced on three, in an open plan with the materials library wending through the entire 6,000 square feet. “It’s important to be constantly looking at how things are made, to throw out preconceived notions of how a material may be used,” he explains. “I don’t like locking things into categories.”


That includes the practice, the epitome of the multidisciplinary approach. Projects range from a store concept for Coach to an apartment tower. “You create a very fine sieve to filter all design decisions through, to make sure every fragrance, every flower, every soundtrack supports that brand’s identity.” The common thread is extremely consistent detailing, he says: “Gucci was about eliminating any sense of fabrication. Everything was polished, as if dropped from the sky. Whereas YSL was very assembled. The customer registers those elements subconsciously.”


Is Sofield himself a big shopper? “Oh god, no! I don’t have the time.” He describes his wardrobe as “T and T.” If it’s not Tom Ford, it’s Target.

>>See more from the April 2015 issue of Interior Design