Marimekko’s Artwork Studio head Petri Juslin has spent three decades at the iconic Finnish company, collaborating with 150 print designers to create more than 1,000 designs. Juslin spoke with Interior Design about his career, how Marimekko stays true to its legacy, and what he looks for in a new pattern. 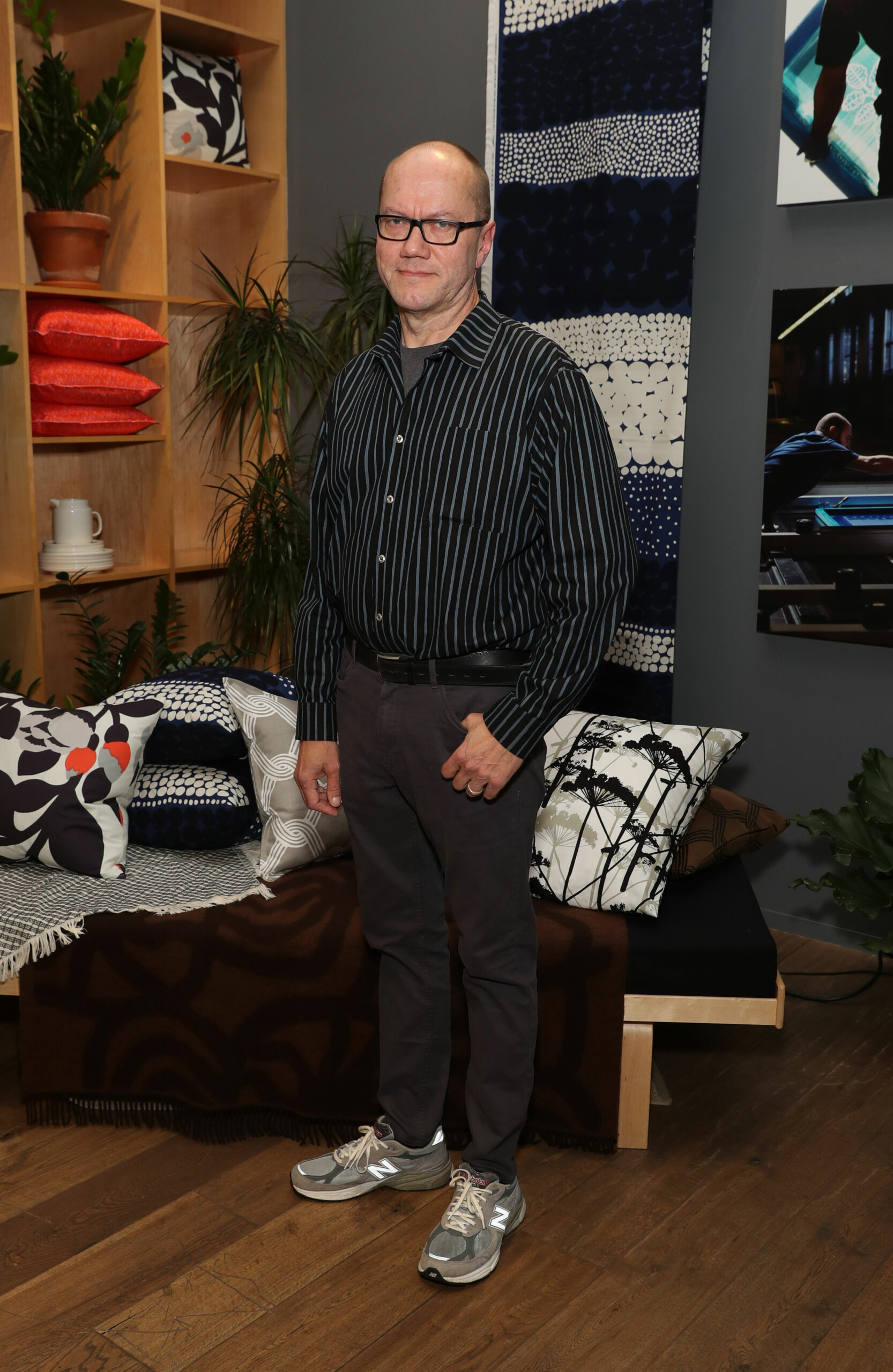 When I was a kid, I saw a lot of printed fabrics in my own house and friends’ houses in Finland. It was like art, in that you could buy a piece of cloth and frame it, or also use it as a curtain. I wanted to know how the screenprinting was done, and I had an idea to study it, but I wanted to work first. So I got a job making screens at the Marimekko printers. After a couple of years, I got to work in the artwork studio, and that’s where I still am!

How different was the studio back then?

We were hand-drawing and using cameras, of course. But it hasn’t changed as much as you might think. I remember very clearly when Photoshop came along—it basically had all the same tools as we were using before, just on a computer, so it was very easy to start using it. We don’t use Pantone color books or anything like that—they are too limiting. We can mix any colors we need. And our designers still use pencils and brushes and scissors to make the originals—it’s quite uncommon that someone will only use a computer to make a design.

Do you think that helps differentiate Marimekko?

From the beginning here, printers and designers have collaborated. Maybe our designers think a little like printers. Maija Isola’s Putkinotko, for example, took the actual plants and exposed them directly onto the screen, like a phototype, then printed with the same screen in two different colors. Those types of overlapping screen designs have become characteristic for us. And we’ve kept the core of production, fabric printing, mostly in-house. We find its value much more precious than the percentage of profits.

Some of those overlapping designs have been in production for decades—what keeps them fresh?

My point of view is that there’s an honest attitude behind them. They are a little bit imperfect, and I think that’s something that touches people’s hearts.

Let’s talk about some of the iconic patterns.

Annika Rimala’s Tasaraita stripe from 1968 was very revolutionary. Originally, it was a unisex t-shirt. It was a statement about equality. The Jokapoika stripe is from 1953, and it still looks modern. We’ve done almost 3,000 different colorways—not all in production, but there’s a point to it: sometimes these overlapping hues can be surprising. Because we print them ourselves, we can say, “well, it’s not what we thought, but it’s nice, so let’s do it!”

And those surprises can keep things modern, too.

We have 3,000 prints in our archives, and we could just rotate those and not have to do anything new. But we don’t want to be a museum. I consider it my responsibility to take young designers into the archives and show them the story and soul of Marimekko, but always with the idea of teaching them the possibilities to make modern designs in the Marimekko way.

How do you do that?

Sometimes they do start with very retro designs, but you just have to give them time and encouragement. Eventually their own handwriting comes out more. Five years ago, for example, Aino-Maija Metsola began a series inspired by the Finnish archipelago Jurmo, which we adapted into the Jurmo print. Sailing around the islands, she saw different weathers and began making watercolors on paper—a kind of weather diary—which became Sääpäiväkirja. We made dinnerware and fabric, and it was quite challenging to make exactly the same color tones in ceramics and fabrics, because the technique is totally different. For ceramics, the oven boils the color away, especially when the color overlaps, so we had to rethink the color separation.

After 30 years and thousands of patterns, how do you keep your own eyes and instincts sharp?

We had a design competition a few years ago, and we had around 10,000 works students sent to us. I went through a big room of these works, and they all looked the same. Almost identical. Nothing popped out—until you get to the masterpiece. You know it immediately. The pattern has to be so powerful that when you see it for one second it touches you. If you have to look at it for a minute or more, it’s probably not very good. Many of the modern Marimekko designs are good designs in precisely that way.