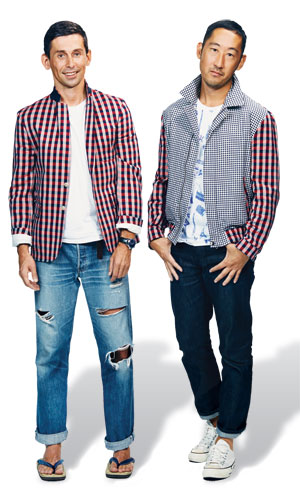 Talk about a mash-up. An architect by training, Masaya Kuroki was born in Tokyo but grew up in Paris. That’s where he befriended Gildas Loaëc, who owned a record shop and went on to become a producer for Daft Punk. But it was back in Japan, working on a movie, that the pair became captivated by the idea of the concept store. Hence their epiphany: Why not create a brand to embrace their dual loves of fashion and music? Basing their logo on a fox, kitsune in Japanese, they launched

for clothing and accessories, plus plain

for albums and concerts.


Growth has been phenomenal. As creative directors for Maison Kitsuné, they have consistently put out two men’s and women’s fashion collections a year. The look? “Effortless French” was the name for spring-summer 2015. Then there are the capsule collections that coincide with the opening of each Maison Kitsuné location. So far, there are seven: four in Paris, two in New York, and one in Tokyo.


Kuroki designed the first one, which Loaëc describes as “very Parisian.” After that, each has been a collaboration with a different ar­chitecture or interiors firm. Second was

design, “more elegant, with beige and powder-pink tones,” he continues. Third came Dimore­Studio’s Britt Moran and Emiliano Salci. “They share our passion for detail,” Kuroki says, referencing the lapis blue and carmine red of the facade, the satiny aluminum for flooring and door frames, the amaranth-toned faux fur covering the chairs, and—“what we love most,” Loaëc adds—the salvaged wood for the display tables. The latest in Paris is also the largest, 2,100 square feet by

. The hybrid aesthetic, part downtown loft and part Haussmannian apartment, is the work of a multinational team: a local firm,

, and an import from British Columbia, Anna Vignale. For Tokyo, meanwhile, Loaëc and Kuroki brought in a French firm, FHC, to reinterpret tatami mats and shoji screens. Kuroki’s passion for coffee resulted in a request to FHC to include a new component, Café Kitsuné. Now, a couple of the Paris boutiques also have one.


Development doesn’t stop there. The Hong Kong debut of Maison Kitsuné is in June 2015 with another Tokyo location to follow in 2016. Kuroki and Loaëc are even pondering a Hôtel Kitsuné.

>>See more from the April 2015 issue of Interior Design