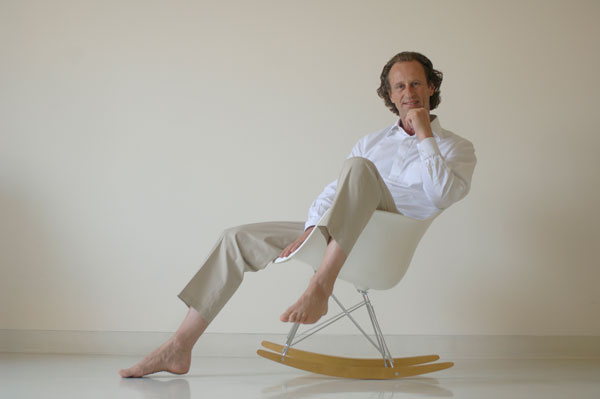 Architect and designer Matteo Thun, born in 1952 in Bolzano, Italy, studied at the Academy of Salzburg with Oskar Kokoschka and at the University of Florence. Whether researching materials, products, or projects, Thun credits early exposure and education as catalysts for his future career. “My parents owned a ceramics factory in Bolzano, and Mama was the designer,” he begins. At the Akademie für Schmuck Kokoschka in Salzburg, Austria, he studied sculpture and painting. He then earned a doctorate in architecture from the Università di Firenze.


Inspired by Leonardo da Vinci’s bird drawings, Thun completed his thesis on the hang glider known as the Rogallo Wing-using it as an excuse to attend UCLA in 1975. “I really spent a year kite-flying,” he confesses. But it was also there that he met Sottsass, who enticed the young architect to Milan. “I stopped by his studio, and he asked me to stay for a few days to do some drawings for Alessi,” Thun recalls.


The rest is history. He founded, with Sottsass, the Memphis Group and became partner of Sottsass Associati from 1980 to 1984. He taught Design from 1983 to 2000 at the University of Applied Arts in Vienna (Hochschule fu?r Angewandte Kunst). From 1990 to 1993 he was Art Director for Swatch. Five years later, in 1984, he opened his own studio.

today employs 50 in Milan, with a second, smaller office in Munich. The firm works internationally on architectural, interior and product design projects, ranging from a small to large scale, in collaboration with the partners Luca Colombo, Herbert Rathmaier and Antonio Rodriguez. The continuous interdisciplinary challenge is the successful formula of the office.


Completed in 2003 in the Italian Dolomites, Matteo Thun’s Vigilius Mountain Resort is a stunning celebration of materiality in general, larch wood in particular. His work with Ettore Sottsass and Memphis two decades prior was the complete antithesis. Thun, however, finds these seemingly disparate attitudes identical. “I’m trying to climb the unexplored mountain,” says the architect. “In the 1980’s, exploration was about language and icons. Now it’s all about sustainability and feasibility.”


In typical Milanese fashion, Thun does it all. On the small-scale end of the spectrum, he has designed watches for Swatch, porcelain tableware for Villeroy & Boch, cast-aluminum cookware for TVS, and bathroom products for Catalano. As a branding exercise for Illy, ‘ he created blank white espresso cups, subsequently decorated by 250 international designers and graphic artists. He’s designed surprisingly few office chairs, however. “I try to avoid furniture,” he says, “because it couldn’t be better than Eames, Le Corbusier, or Mies.”


Moving up in scale, Thun has left his mark on the Italian landscape with prefabricated housing and private villas. Commercial work includes the new United Nations building in Geneva; Missoni shops in Milan, Rome, and New York; Fila stores in Milan, Paris, and London; and Porsche showrooms in the German cities of Berlin, Munich, and Hamburg, the start of a worldwide rollout. Hotels are his current passion. “I’ve spent 20 years traveling between Europe and the Far East, so I’ve become a consumer of hospitality models. A lot can be done. Not as in the recognition factor of a Philippe Starck but as in finding the soul of a place.”


In Hamburg, his Side hotel “introduces fun and an emotional experience by using colors,” Thun says. The lobby, for instance, features his blue and orange lounge furniture for Rossi di Albizzate. In Meran, Italy, his Pergola Residence hotel makes minimal impact on the surrounding vineyard.


Thun’s multidisciplinary experience extends to communications: packaging, imaging, and trend-spotting. Currently, he’s undertaking a revamp of two McDonald’s locations in Rome, handling communications, product design, and interiors-just like Achille Castiglioni might have done, Thun points out. Others admired? The classic modernists, particularly Ludwig Mies van der Rohe. But also Leonardo and Filippo Brunelleschi. Like those Renaissance legends, Thun values art as much as architecture. “I’ve seen every Venice Biennale since 1958, and my research always mixes 2-D and 3-D,” he says.

, a comprehensive selection of Matteo Thun’s architecture and product design works from his earliest works to this day.