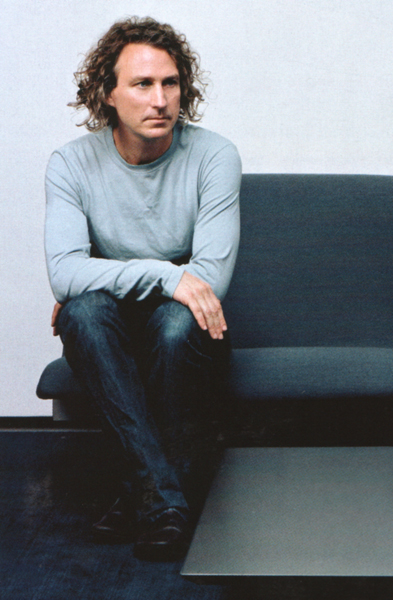 His interiors are spare, elegant, and invariably lit by an ethereal glow. Pared to programmatic essence, Michael Gabellini‘s  work emanates a serenity that belies an underlying complexity. His design process is based on an intense investigation to determine “what things are important and what things should melt away. Design has catharic value.” Heady words from one renowned for ties to fashion, albeit fashion at a rarefied level with Jil Sander, Salvatore Ferragamo, Giorgio Armani, and Gianfranco Ferre. “It takes an immense amount of research to develop a notion of function that equates with luxury,” says Mr. Gabellini, who adds that “the term minimalism makes me chuckle. On the surface, that’s it. But my work is based on the investigation of past cultures.”

He cites archaeology, science, and technology as influences, but most compelling is art, notably James Turrell and Robert Irwin. And his father, an artist and interior designer, and grandfather, and Italian stonemason, no doubt also left their mark.

Mr. Gabellini graduated from the Rhode Island School of Design, then worked for Kohn Pedersen Fox Architects in New York. On sabbatical in Rome from 1986-1987, he researched Etruscan culture, studied Arte Povera artists, and learned to carve stone in Pietrasanta.

He established Gabellini Associates in 1991 and rapidly created an international presence with Jil Sander’s Paris shop n Hamburg head-quarters; the lipstick-red Ultimo boutique in San Francisco; Nicole Farhi, New York; and the nonpareil 80,000-sq.-ft. Armani Center in Milan. He has created New York Galleries for Marian Goodman and Grant Selwyn, completed commissions for the Solomon R. Guggenhem Museum and the Cooper-Hewitt National Design Museum, won a competition for the redevelopment of the medieval Piazza Isolo in Verona, and earned numerous other accolades.

Currently, his staff of 30 divides its time among commercial, residential, and product design. (Mr. Gabellini credits partners Kimberly Sheppard and Dan Garbowit as instrumental in the firm’s success.) Their first hotel, tentatively called M31 in homage to the Andromeda Galaxy, is a new 14-story structure in San Francisco slated for 2003 completion. There’s more work than ever for Ferragamo and Jil Sander, as well as residences in London, Denver, and Los Angeles, buildings in London and Stuttgart, a new collection from B&B, more pieces with Nakashima and Neonakis, and accessories crafted in Pietrasanta on the boards.

Had he not been an architect, Michael Gabellini would have turned to sculpture. Light would have been his medium–and he still regards it as the keystone of his architecture and design. “Light is the first thing we consider before we paint our canvas of materials,” he says. “It is a source of attraction and mystique.”

Recent projects opening later in 2014 include the re-inaugerated Rainbow Room and surrounding 65th floor at 30 Rockefeller, which includes pre-function gallery space and SixtyFive, a transitional event space that will serve as an evening cocktail lounge open to the public. The firm is also completing a full interior renovation for the Knickerbocker Hotel, a project comprised of 330 guest rooms with four customized grand suites as well as the ground floor lobby, espresso bar, restaurant, private event spaces and rooftop bar and terrace. A full renovation and historic preservation of a seven-story townhouse in Manhattan’s Upper East Side will also be completed later this year.

A few recent accolades include the 2014 Honor Institute award for Excellence in Interior Design from the American Institute of Architects, National and State chapter for residential project “Soho Loft” as well as various awards for furniture line, The Fibonacci Collection for Janus et Cie.