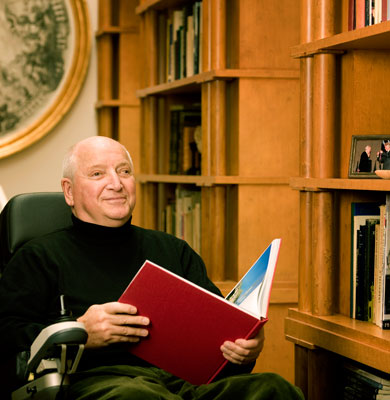 American architect and designer Michael Graves received his architectural training at the University of Cincinnati and Harvard University. Mr. Graves has been in the forefront of architectural design since he founded

in Princeton, New Jersey in 1964. A Robert Schirmer Professor of Architecture, Emeritus, at Princeton University, where he taught for almost 40 years, Mr. Graves is an influential theorist as well as a diversified and prolific designer. Since the early 1980’s, his work directly influenced the transformation of urban architecture from the abstraction of commercial modernism toward an interest in context.

) plus a personal leather goods collection (distributed by

He is closely associated with postmodernism, often working symbolic elements into the structural framework of his building and product designs. Strong, muted colors dominate his palette, the influence of which appears throughout the design community. While Mr. Graves is noted for his focus on spatial relationships, his work sometimes inspires controversy. Among Mr. Graves’ well-known projects is The Humana Building, a corporate headquarters tower in Louisville, KY, which, in addition to receiving local and national AIA design awards, was cited by Time Magazine as one of “the 10 best buildings of the decade (1980s).” Other notable buildings are Disney’s corporate headquarters in Burbank, CA, the headquarters of the Ministry of Culture in The Hague, The Netherlands, a Federal Reserve Bank, in Houston, TX, and the much-acclaimed state-of-the-art headquarters and training center for the Philadelphia Eagles football team. The award-winning 1.1 million-square-foot headquarters of the World Bank Group’s International Finance Corporation anchors one end of Pennsylvania Avenue at Washington Circle in Washington, D.C., and MGA has designed the expansion and renovation of the U.S. Courthouse at the other end of Pennsylvania Avenue just below the Capitol. Mr. Graves’ design of the embellishment for the scaffolding around the Washington Monument during its 1999-2000 restoration was widely noted and praised.

Another significant segment of MGA’s practice has been the design of hotels, from business hotels such as the Fukuoka Hyatt Regency in Japan and the Aventine Hyatt Hotel in La Jolla, CA to the well-known Walt Disney World Swan World Swan and Dolphin Hotels in Florida and five resort hotels in Egypt. In addition to single-family houses, residential design includes multi-family buildings such as the 1500 Ocean Drive condominium in Miami, Florida; high-rise residential projects in Japan and in Manhattan; and student residences at universities such as New Jersey Institute of Technology, Drexel University, and Rice University.

Mr. Graves has dubbed himself “a general practitioner,” designing not only the interiors for the majority of his projects, but also a wide range of furnishings and artifacts, from furniture and lighting fixtures to jewelry and dinnerware, for companies such as Alessi, Steuben, and Disney, Phillips Electronics, and Black & Decker. He has teamed with Target Stores to bring his signature style of design to a larger public in a wide variety of product categories. For the German partnership of

, he has created “Dreamscape”, a bath fixtures and fittings collection, and for the Italian hardware manufacturer

, a series of door handles in various metals.

Numerous honors have been awarded to Mr. Graves, some of which include 15 Progressive Architecture awards, 8 national American Institute of Architects Honor Awards, and the American Academy and Institute of Arts and Letters’ Arnold W. Brunner Memorial Prize in Architecture in 1980.