See the top takeaways from the show’s products, trends, people, news and more. . . 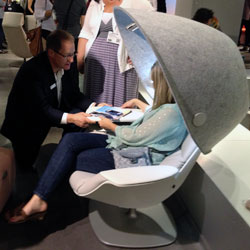 and Jess Sorel’s Palamino collection for

, conceived with hospitality, health care, and office environs in mind, NeoCon 2013 was teaming with products that were not only functional, but a lot of fun to look at—and try out. Techological advances were, of course, at the forefront, among them Drape by Konstantin Grcic for

, made from embossed and 3-D printed vinyl. Who could forget Martin Keen’s perch-enabling Locus workstation for

, which engenders a posture halfway between standing and sitting—or miss the buzz surrounding 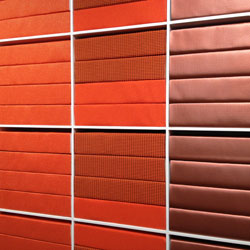 ‘s Bluescape, a digital workspace developed in collaboration with

, was part of a bigger conversation this year: how to design for our technology-driven work environments while maintaining a steadfast committment to, well, design. One of the trends derived from this tension was tabletlike work surfaces—attached to chairs, ottomans, and on sofa backs (more on that

), the venue welcomed a host of new showroom spaces, including

. And everyone noticed the showstopping bold colors—like, ahem, orange—that set the Mart on fire. Go 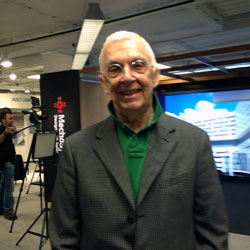 Beloved Mel Byars likely witnessed his last NeoCon, as he announced his retirement from his longtime position as creative director of

. We all did a double take when we spotted Dana Grizwin and Mac Stopa of

dressed from head to toe in matching patterns at more than one event. The industry lost one of its design legends during the show: Niels Diffrient, whose focus on ergonomics gave us the revolutionary Freedom Chair for

, passed away at the age of 85. Equally sad: Architect Graham Downes’ firm was revealed as slated to close at the end of the month due to his passing earlier this year. On a happier note, we were lucky to catch the amazing Tuesday keynote by Bjarke Ingels of

. You may have heard his term “CourtScraper”—the merging of a skyscraper and a courtyard at his NY project that just broke ground. 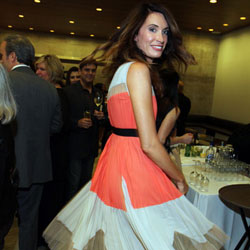 ‘s 11th annual Giants celebration, which filled two levels—and a chapel—of her firm’s stunning new Gratz Center at the Fourth Presbyterian Church on Sunday. It was a spicy night at the Believe Red Hot Ball,

‘s popular annual fundraiser held at the Radisson Blue Aqua Hotel Chicago. More hot times were had at COOL, the

) and 21st Annual Will Ching Competition to celebrate originality and excellence in commercial design from firms with five or fewer employees. KS McRorie Interior Design of Hilton Head Island was revealed as the 2013 winner for Casa San Agustin. On site at the Mart, cocktails and light fare were easy to find as we party hopped from

(did you see the color-changing dance floor?) to

(with it’s costumed bartenders) to 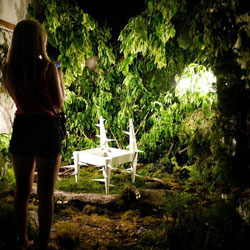 In keeping with our hyper digitized present, social media had more of a presence this year than ever before. One of the biggest hits?

‘s quoting of Eames: “Charles Eames said the role of a designer is that of a good host anticipating the needs of the guest.” On Instragram, Herman Miller again saw virality with their “Living Office” installation of iconic furniture in the lobby of the Merchandise Mart. And, perhaps predictably, Haworth’s Bluescape lent itself to Vine, where we weren’t the only ones who recognized the video appeal of the interactive digital workspace. The manufacturing process behind the bio-based fibers of

also made the rounds on Twitter…see more