Ones to Watch: Brendan Ravenhill Studio 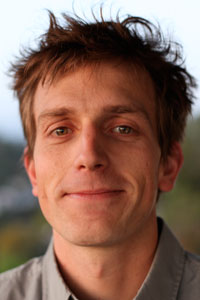 “In my designs, I seek to find that beautiful balancing point where manufacturing methods, material properties, and economy are all equally considered,” says Brendan Ravenhill, owner of the

, which specializes in furniture, lighting, product design, and interiors.

His father was a curator of African art at the

, and so it wasn’t surprising for Ravenhill to pursue a creative career, too. With an undergraduate degree in sculpture from

and a masters in industrial design from

, Ravenhill has an eclectic résumé, including stints as a lobsterman, boat builder and timber framer—pursuits perhaps clues to his love for woodworking.

Originally intending to escape the East Coast winter for a few months, he ended up putting down roots in a Rudolph Schindler-designed house-cum-studio, attracted to the vibrant local culture of small, specialized manufacturers. “It makes Los Angeles a special place in which to be a designer. People are so welcoming, generously sharing information and resources,” he says. He has built relationships with a myriad of suppliers and fabricators, some of whom retooled their own way of doing business in the wake of the evaporation of once-secure, large-scale manufacturing contracts.

“I like to bring projects to life in LA because you can do it faster by driving your own timeline and in a more dynamic fashion, working directly with fabricators,” Ravenhill explains. “You can create details that would be lost if the work was sent overseas. When you meet a new [local] fabricator and you see their capabilities, your mind just opens up to other possibilities new ways you can do things.”

While meticulous in the ramp-up to production (he rarely goes into a project without making three or four factory tours), Ravenhill can embrace the unexpected event, as well. For instance, his Spun Metal Planter was an accidental design. A mistake during the prototyping process for a wastebasket resulted in a trumpet-shaped vessel. Ravenhill recognized the appeal of the object, and ordered up a limited edition.

The studio made a major introduction at

with the Cord family of light fixtures. Ravenhill explains, “This grew out of our original Cord Lamp, which is my take on Jean Prouvé’s Swing-Jib lamp. It uses the electrical wire to not only provide power, but also acts as tensioning member to hold the arm aloft.” A vaguely biomorphic, two-pronged porcelain socket is a constant design element in the variously-sized chandeliers. The collection is an exercise in tensegrity, where structures are formed by materials that work either fully in compression or tension. In the Cord collection, lightbulbs are suspended in a rigid constellation, like stars in the Los Angeles sky.

Ones to Watch: Proximity Kitchensystem

Ones to Watch: Semihandmade