Ones to Watch: Horgan Becket

Gregory Horgan and Cayce Becket, founders of their eponymous studio,

, have always taken a hands-on approach to their projects. The husband-and-wife team not only design; they also fabricate, wielding blow torches, plasma cutters and CAD software with equal ease.


The couple, who met while students at the

, launched the studio in 2004 by creating architectural products (door handles, staircase rails), but quickly expanded to furniture. An early media cart had a series of staggered, open shelves for a flatscreen television, DVD player and speakers; it consisted of a welded-iron frame mounted on industrial wheels. Its brutalist lines were counterbalanced by an almost dissonant flourish: a curled metal motif, evoking unfurling tendrils.


As with a series of metal and wood bookcases and tables (with notably thinner proportions) that followed, Horgan Becket’s early pieces all had an “industrial modern” feel—an aesthetic that, at the time, few others were doing, explained Horgan. “That’s what gave us the start; that was the foundation. But after we started, the market really filled in in that area,” he said. “Now Restoration Hardware and everyone else has moved in. It’s not an area we wish to compete in.” 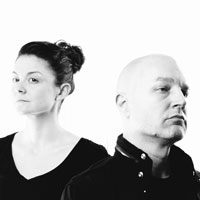 is a departure from that earlier work in aesthetic and process. If the early pieces were about craft—every detail painstakingly finished by hand—the Mesh line is about efficiency and scalability. The potential for flat packing and higher speed production informed the design. Here, airy steel-wire bases, evocative of utilitarian fencing, are paired with butcher-block tops in maple and walnut. Although the basic elements (metal, wood) may have carried over, the bold addition of color—red, mint green, and blue-tinged gray—result in a vibe that is less turn-of-the-century-factory and decidedly more contemporary.


Indeed, part of the appeal of the Mesh Series is its sense of nimbleness. According to Horgan, the bases were intended to be “structural, but also expressive.” And modularity is an essential part of the series’ DNA. “When we started it was a bench, but then we unlocked a formula for it,” said Horgan. “The line now includes 30 to 40 pieces, and that’s before counting anything custom.”

There are over a dozen standard table configurations, including a cafe table and a full-height work desk. Table legs can be swapped out for bench legs to create dining seating. There are also mesh panels to work with, which can be used to fashion a reception desk that’s enclosed on three sides, for example. To accommodate a line with so many SKUs, Horgan Becket expanded its once insular sourcing to what Horgan describes as “east coast local.” The firm has tapped vendors in Pennsylvania and Long Island but maintains tight control over all of the metal work.


The trajectory of Horgan Becket is perhaps telling. After graduating with degrees in architecture, Horgan and Becket founded their firm, then were wed years later. “Working together made it easier to get married,” explained Horgan. “By the time you get to that point, you know you’ve seen everything.” Or perhaps not everything. As the Mesh Series clearly demonstrates, good relationships always have the potential to evolve.