Ones to Watch: Matteo Zorzenoni

“Italy is a really good place to be a designer,” says Treviso-based

. “Wherever you go you are surrounded by design, it’s part of our culture.” The designer grew up in the North of Italy close to Venice surrounded by a community of glass blowers, ceramicists and metalworkers—an upbringing which has helped to shape his material-driven work. From handblown glass lamps to interactive digital installations, Zorzenoni’s style is characterized by precise lines and deft detailing achieved through close collaboration with local craftsmen.

After graduating from design school in 2002 at the age of 22, he took a job as an assistant tutor in

design class at the IUAV in Venice, becoming the youngest teacher at the university. He tutored alongside Sadler,

, who, he says, each showed him “totally different” approaches to design. Following his time at IUAV, Zorzenoni honed his skills at the

. There, he met renowned Spanish designer

, with whom he is currently working with on a number of commericial and residential interiors. 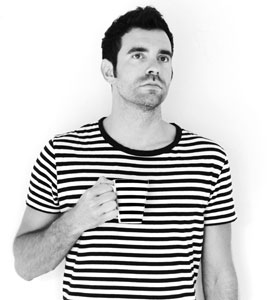 . Speaking about the new venture, he says, “It’s a good moment to do something new in the design world. We wanted to work with the best suppliers but keep the prices affordable.” The brand’s inaugural collection includes Zorzenoni’s Miss and Mrs carafes, which are made using an old Venetian glass blowing technique. “Glass pieces made using this technique usually cost around 600 euros,” Zorzenoni explains. However by switching the glass for Pyrex, Something Good’s Miss and Mrs carafes are priced at a more accessible 100 Euros each, making them what he calls “a compromise between gallery and mass production.”

In 2013, as well as working on various interiors projects with Spanish designer Jaime Hayon and launching Something Good, Zorzenoni introduced 10 products with brands such as

, hosted a porcelain workshop at

in France and created a light and sound installation at the Replay store in Milan. On top of this, he moved his studio and became a father for the first time in December. After such a manic 2013 you’d think Zorzenoni might need a break. Not at all. With a string of upcoming lighting and furniture launches scheduled for the Milan Furniture Fair, 2014 looks set to be equally eventful.