Ones to Watch: Matthew Plumstead

In the design world, you come to expect that if a firm is called “

” then it was probably founded by someone called McCarty and someone called Quinn. But this is not the case: McCarty Quinn is, in fact, Matthew Plumstead, a 38-year-old designer and graduate of Michigan’s famed

, now based in his hometown of St. Paul, Minnesota. 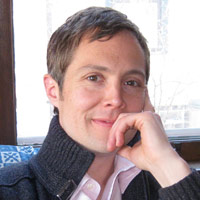 Last year was a big one for Plumstead, who finished his degree, won recognition at the

for his student thesis project, and launched his own practice, all in the space of scarcely six months. The engine behind much of his recent success, and the winner of ICFF’s Studio Award, is ClipTree—a modular, easy-to-assemble, wall-mounted storage system that he first developed over a year ago and that went viral on design blogs after he posted it online. “I didn’t realize it was going to take off like it did,” says the designer. “I’m still enjoying the whole process.”

On its way into design retail outlets now, ClipTree gave Plumstead the impetus he needed to strike out on his own, and just this August he founded McCarty Quinn. But why the name?

“That’s a good question,” explains Plumstead. “It’s actually my middle name, plus the middle name of my daughter.” The youngest Plumstead, not quite three years old, has already traveled with Plumstead from Iowa (where his wife pursued a law degree and he worked on small Etsy-type designs) to Michigan (starting in 2010) before finally settling down in the Twin Cities.

Hiding behind a corporate pseudonym was a deliberate choice for Plumstead, he says. “I wasn’t terribly sure what the business model for my company was going to be—whether it would be my authorship or with other designers under the label.” Having the quasi-anonymous moniker gives him the option of bringing other designers aboard in the future; for now, however, he’s flying solo, ramping up sales on ClipTree while developing prototypes for a sleek new office suite and work lamp.

Ones to Watch: Alex Turco