Ones to Watch: Semihandmade

The assembly process for IKEA kitchen cabinets may be appealingly simple, but the same can’t be said about their appearance; their style—or lack thereof—could charitably be described as generic. John McDonald, founder of

, saw an opportunity to improve on the aesthetics of the product that would cater to the store’s design-conscious clientele. It’s an idea that garnered the Duarte, California-based firm the Editors’ Award for best kitchen/bath product at this year’s ICFF.

Providing custom doors, drawer fronts, and side panels that are pre-drilled for use on the mass-produced cabinet carcasses has proved a hit, with the business going nationwide in three years. Priced about 30 percent higher than IKEA’s standard doors and significantly less expensive than a true custom-kitchen installation, Semihandmade offers value as well as visual distinction.

The story of Semihandmade is a lesson in persistence. After 14 years in the mercurial world of Hollywood screenwriting, McDonald was ready for a change, and started picking up antiques at Los Angles-area swap meets. He’d refinish the pieces, then sell them at flea markets. When fumes from the chemical strippers eventually gave him a sinus infection, he shifted focus and began to design and build furniture. A mishap with a bandsaw that cost him a finger, coupled with the onset of the recession, were the circumstances that led to the start of Semihandmade. “My motivation was desperation,” McDonald says. “It’s like being a poet—do you want to make money or not?” 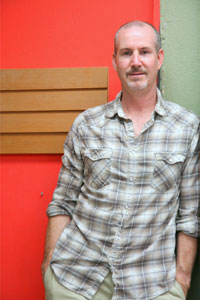 A new collection, called Batch, is an eco- and economic-friendly alternative to conventional sequence-matched doors. Instead of an uninterrupted flow of horizontal grain—a look that generates a lot of off-cut waste—Batch uses vertical grain veneers applied in a random pattern on cabinet fronts. The result is an edgy interpretation of a classic design.

Redo, a sideline of the company, applies the same principle to create one-off furniture pieces. Again using kitchen-cabinet boxes as a starting point, with the addition of would-be waste material repurposed as door fronts, unique bookcases, media units, hanging cabinets, and credenzas can be created.

Ones to Watch: Brendan Ravenhill Studio

Ones to Watch: Proximity Kitchensystem