As the engineer behind the Sydney Opera House and the Centre Pompidou in Paris, Ove Arup was a singular talent. But it was his collaborative, multidisciplinary approach that made the greatest impact on the built environment, and helped grow a uniquely innovative firm. Today, his eponymous company employs 12,000 planners, designers, engineers, and consultants, in 40 countries. As of today, visitors to the Victoria & Albert Museum (V&A) in London will be able to explore the Danish-British engineer’s life and work in the new exhibit “Engineering the World: Ove Arup and the Philosophy of Total Design.” 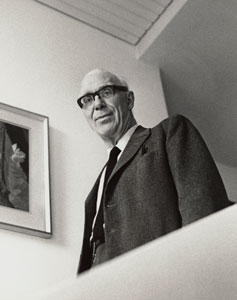 The exhibit walks guests through 150 archival drawings, prototypes, 1:1 scale building parts, and interactive displays that span more than 100 years of engineering design—from Arup’s early work, such as the Penguin Pool at the London Zoo, to his firm’s current projects, including SolarLeaf, a bio-reactive façade made up of glass panels filled with energy-producing microalgae, and a recreation of an Arup SoundLab, where visitors can hear case studies for concert halls and the controversial HS2 railway route.

Other highlights include the Ferranti Pegasus computer that helped make the Sydney Opera House’s gravity-defying shells a reality. One of the first uses of computers in structural analysis, the machine reportedly saved the team ten years of manual calculations. A section on the Pompidou Centre in Paris reveals how the Arup engineering team developed the art museum’s now iconic exoskeleton of escalators and brightly colored pipes and ductwork. Arup’s commitment to design that is inventive, functional, and sustainable is showcased in prototypes and test models for the roof of the Menil Collection in Houston, Texas. Built in collaboration with architect Renzo Piano’s team, the art gallery’s system of concrete louvers under a glass ceiling revolutionized atmospheric and lighting standards in galleries around the world.

Museum goers can peek into the mind of the man behind the work through a collection of his personal drawings, on which he often scribbled fanciful poems and notes. “Colorful, whimsical, and full of humor, they are certainly not what you might expect from such an influential engineer,” said co-curator Zofia Trafas White. “And yet they are key to understanding Arup’s unique personality which made him such a charismatic and influential leader in the field.”

Before his death in 1988, Arup collaborated with such groundbreaking architects as Berthold Lubetkin, Renzo Piano, Richard Rogers, and Norman Foster. And it’s hard to overestimate the way his Total Design philosophy affects how architects and engineers work together now. “Today, engineering involves a vast number of specialists in fields of expertise that even Ove would never have imagined—from acoustic engineering, to crowd control analysis, or environmental engineering, among many others,” said co-curator Maria Nicanor. “Because of this incredible expansion of areas of expertise, … his legacy is more relevant today than ever.” After seeing all the evidence laid out in this engaging retrospective, visitors will be hard-pressed to disagree.

“Engineering the World: Ove Arup and the Philosophy of Total Design” is the headline exhibition for the V&A Engineering Season. It will run from June 18–November 6, 2016.