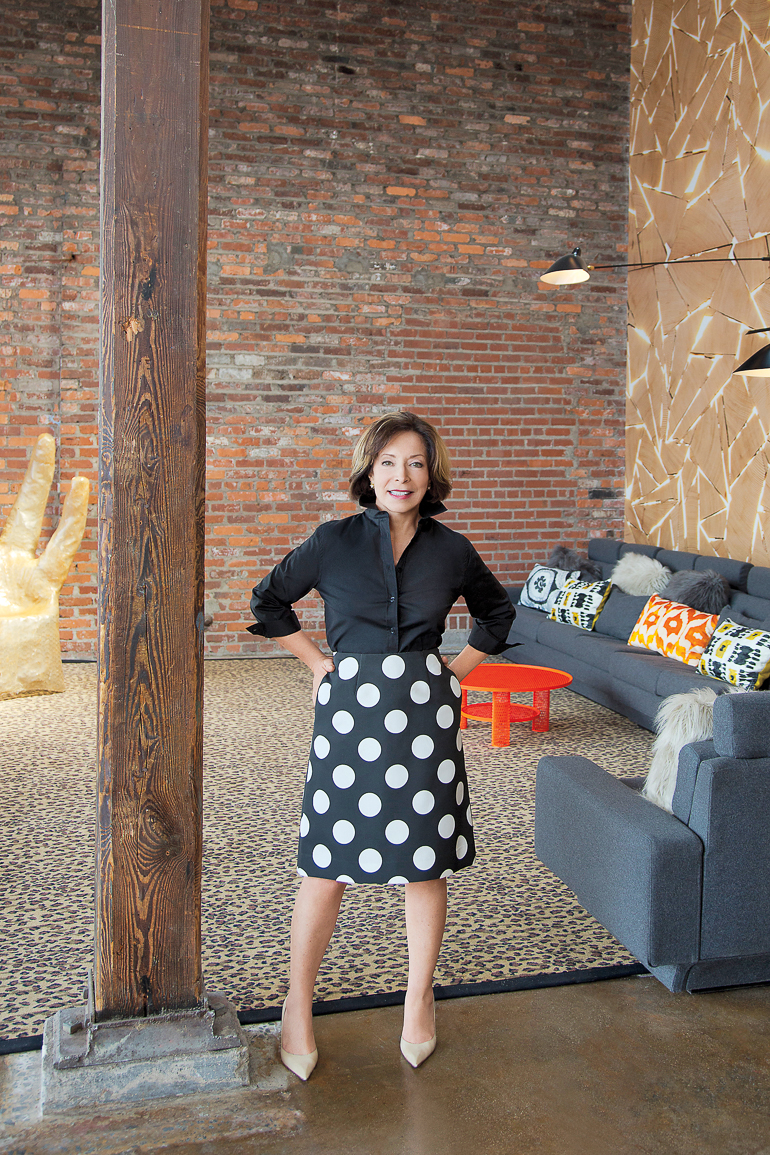 Decades after opening the Savannah College of Art & Design, Paula Wallace is still as excited to talk about it as she was on the very first day. She’s not only the driving force behind SCAD, now celebrating its 40th anniversary, but also the school’s biggest and most articulate fan, chief spokesperson and international ambassador for one of the most prominent creative institutions in the U.S.—home to the number-one interior design program in the country. Officially, she has served as SCAD’s president since 2000, having previously held the positions of academic dean and provost. Unofficially, she is a celebrity in her own right.

Running a school with 15,000 students at four locations on three continents, plus a trio of teaching museums and dozens of auxiliary programs, is no easy task. How does she do it? “Well,” she answers, “I do have a lot of energy.” Along with more than her fair share of charisma, all packed into a petite frame.

She credits her love of education to her childhood piano teacher, a role model who gave 12-year-old Paula her first job in her hometown, Atlanta. “She taught the older children in the neighborhood, and I taught the younger ones,” Wallace recalls. She went on to earn a BA from Furman University and master’s and education degrees from Georgia State University, then taught public school.

After a while, Wallace began thinking about a new kind of arts-focused higher education, drawing from her own teaching experience and what she would have wanted as a student. “It was a little audacious, I guess,” she admits. To get the project under way, she sold her house and her treasured yellow Volkswagen. Nevertheless, on a teacher’s salary, she could not implement her plan alone, so her parents, May and Paul Poetter, contributed their retirement savings.

Savannah, Georgia’s oldest city, seemed the right place, with its gracious plan of open squares and trove of buildings from the 18th and 19th centuries. Location chosen, actually starting the school was largely a do-it-yourself project for Wallace. She learned as she went along, creating a nonprofit and bylaws, securing federal recognition and regional accreditation, recruiting trustees, and buying an 1892 armory to house classrooms. “We mailed a poster and catalog to every high school in the U.S., and people just started applying,” she says. In 1979, the students arrived, a first class of 71. The rest is a history of nonstop growth.

Since becoming president, Wallace has added locations in Lacoste, France, Atlanta, and Hong Kong, where SCAD won a competition to transform a British magistrate’s headquarters. “We like to rescue derelict buildings,” she offers. “I’m always up for a challenge.”

She has increased the academic scope as well. SCAD currently offers more than 100 programs across more than 40 disciplines. (Though interior design, one of the eight original majors, remains close to her heart.) SCADpro, a program Wallace came up with, invites students and faculty to collaborate with the likes of Google, Microsoft, and Coca-Cola to solve their toughest design challenges. She calls the experience a “10-week job interview” for the students—often resulting in long-term employment offers. Special events such as arts and film festivals, which she’s organized on and around SCAD campuses, have helped revitalize nearby communities in addition to getting students involved with their neighbors and garnering an impressive list of awards, both to the college and to herself. Her impact on Savannah has been called as significant as that of the city’s founder, James Oglethorpe.

Family, starting with her parents, is the support system that makes everything possible. Her husband, Glenn Wallace, is the school’s chief operating officer. As for the families of alumni, now numbering more than 40,000, many send their children to SCAD.

Of all her activities, what is her favorite? “I like to read, write, play piano. But most of all, I like being around the students.” Though she enjoys travel, frequent visits to SCAD campuses don’t leave much time for other destinations. Would Wallace change things? Not a chance.