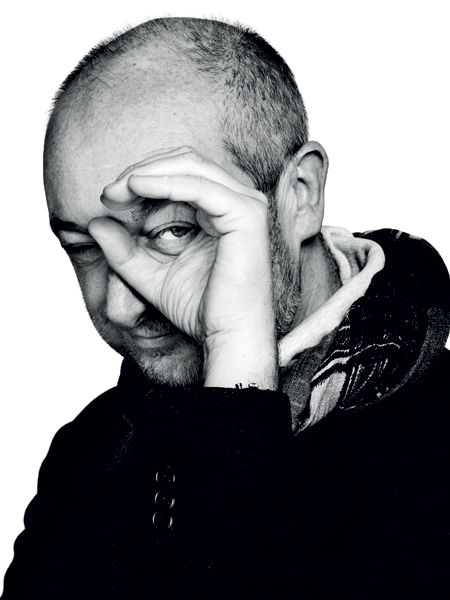 . His CV could double as a guide to the furniture fair, so dense is the list with manufacturers for which he’s designed products and exhibition stands. Alessi, Cappellini, Cassina, Desalto, Fantini, Flos, Fritz Hansen, Glas Italia, Kartell, Knoll International, Lema, Living Divani, Lualdi, Porro and Tecno.


Not to mention Boffi, the client that first hired Studio Lissoni in 1986, the year that he and Nicoletta Canesi founded the design and architecture firm. Playing to Lissoni’s many strengths, the high-end Italian kitchen and bath company charged him with a total re-style: art direction, products and showrooms.


From products and graphics to full-scale interiors and architecture, total design is what Lissoni does. “It’s traditional in our Humanistic culture,” he says. “I’m Milanese.” Growing up in the heyday of Marco Zanuso, Ettore Sottsass, Achille Castiglioni and Vico Magistretti, Lissoni followed in their footsteps, expanding all over the world.


Residential interiors in Tuscany and Milan show his sharp-eyed minimalism, as does a Forte dei Marmi villa that he built. In the hospitality arena, Lissoni’s masterful renovation of Amsterdam’s Conservatorium Hotel converted the former Sweelinck Conservatory of Music into a luxury hotel. The grand reception hall now mixes Lissoni’s sofas and bergères with pieces by Ludwig Mies van der Rohe and Eero Saarinen.


In Milan, Piero Lissoni renovated the Teatro Nazionale for the Dutch group Stage Entertainment, he designed the new offices of La Rinascente Group and showrooms for


he transformed Enzo Ferrari colonial house and office on the test track into the Ferrari Clubhouse at the Fiorano racetrack.


“We grow up and get our degrees in Italy,” says Lissoni, who earned his at the Politecnico di Milano. “But I never planned to stay just there.” In Paris and London, he designed the Boffi and Cassina showrooms; in Istanbul, the architecture and interiors for the eight-storey Benetton Store merge minimalism, Italian-style, with Turkish exoticism.


Exploration of Asia began in 2002, with Cassina IXC showroom that opened in Tokyo, followed by the inauguration of Mitsui Garden business hotel.


Projects in progress include the interior architecture and design of a tower in Shanghai for the Swire Hotels group and the interior design of a new brand of 8 business hotels for Shilla Stay Hotels in Seoul and different locations in South Korea.


To address this growing volume and diversity of work, Lissoni formed two auxiliary Milan studios, Graph.x for graphics and Lissoni Architettura for architecture. Home base for them is the artsy Brera district. Known collectively as Lissoni Associati, the affiliates are now handling hotels in Moscow, Tel Aviv, Miami, and the United Arab Emirates. And Lissoni has just opened a New York satellite to track the progress of U.S. projects including a penthouse in New York and the transformation of the former Miami Heart Institute in Miami Beach into a residential complex of condos and villas for The Ritz-Carlton.


With all this travel, it’s natural that he’d try his hand at transportation, albeit a rarified mode: Lissoni worked with Luca Brenta Yacht Design to give the sailing yacht Ghost all the panache of an urban living environment. A couple of years later he worked on the 50 meters motoryacht Tribù.


How does he do it all? “My work is for me a passion” he says. “I try to convey my enthousiasm to others.” That seems to be a challenge he’s already mastered.