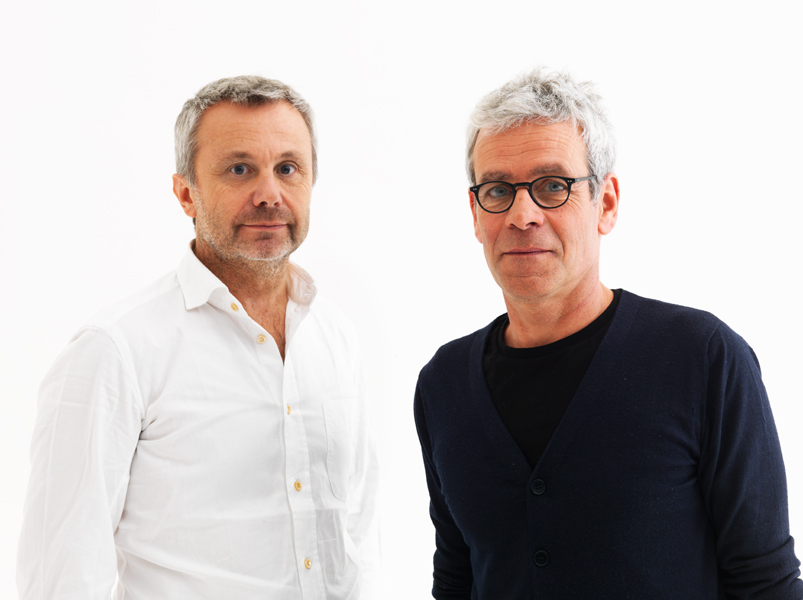 Bio : Pierre Beucler and Jean Christophe Poggioli first made a name for themselves on the cultural scene with the opening of the Louvre’s Greek, Etruscan and Roman Antiquities Rooms. The opening of the Cernuschi Museum, which houses Asian art, has been making the news lately.

In addition to working on numerous museum projects, Beucler and Poggioli also have a particular interest in architectural design in the fashion industry. Most notable among these are “Comme des Garçons Parfums”, on Place du Marché Saint Honoré, which is the first space in a fashion house dedicated completely to perfume, and the prêt à porter boutique in rue du Faubourg Saint Honoré which features all the company’s lines in a stunning setting, saturated in red. Other houses have now entrusted them with the creation of new architectural concepts in close cooperation with the artistic directors of each of the collections: Cacharel by Clements Ribeiro, Costume National by Ennio Capasa, Dior Homme by Hedi Slimane. Poggioli and Beucler set new architectural standards with Christian Dior.

For “Dior Joaillerie”, whose collections are designed by Victoire de Castellane, they designed the boutique for haute joaillerie on the Place Vendôme and various presentation spaces around the world, projects in which a miniaturized setting of the headquarters in the avenue Montaigne becomes the classical center of a series of elaborate window displays against a backdrop of pearl-gray lacquer. Dior has also entrusted Poggioli and Beucler with the design of their key branches: Rue Royale in Paris, Shinsaibashi in Osaka, and Ginza and Omotesando in Tokyo carry all the lines, accessories, prêt à porter, haute joaillerie, beauty products and perfumes. These spaces show a great deal of contrast and balance the history of the house with the new energy infused by he artistic director of the women’s collections.