Preview “Shelter: Rethinking How We Live in Los Angeles”

Last week, the A+D Museum celebrated its new home. The museum, which first opened in January 2001, is now located at 900 East 4th Street in Downtown Los Angeles. The inaugural exhibit in the new space, “Shelter: Rethinking How We Live in Los Angeles,” will open August 20 and feature work by LA-based architects and design firms including MAD Architects, LA Más, Bureau Spectacular, PAR, Lorcan O’Herlihy Architects, and wHY.

The opening showcase focuses on a theme central to the museum’s new home, and on where Los Angeles is headed in terms of future development. “The exhibit asks participants to rethink housing models for the new Los Angeles,” explains co-curator Sam Lubell. “That means an LA that is more dense, more costly, and more environmentally pressed than ever before. Solutions must also take into account new transit options that have come to the city in recent years. The locations for these models are two of LA’s most fertile new development zones: along the Los Angeles River and along the Metro Purple Line extension on the Wilshire Corridor. LA is going through extraordinary changes, and we hope the show will establish some new residential models to adapt to its transformation.”

Lubell notes the Downtown Arts District is one of the most quickly developing areas of the city due to its proximity to transit, density, and the river. “We think a show addressing these conditions is a perfect fit to kick things off,” he adds. 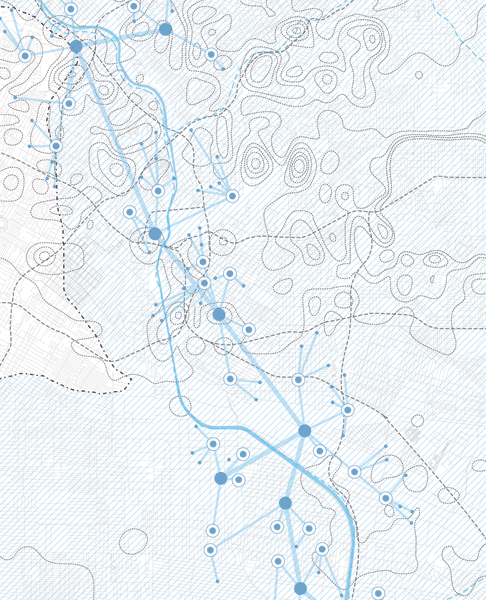 Map from LOHA’s SHELTER exhibition about urbanization and water usage. Courtesy of LOHA.