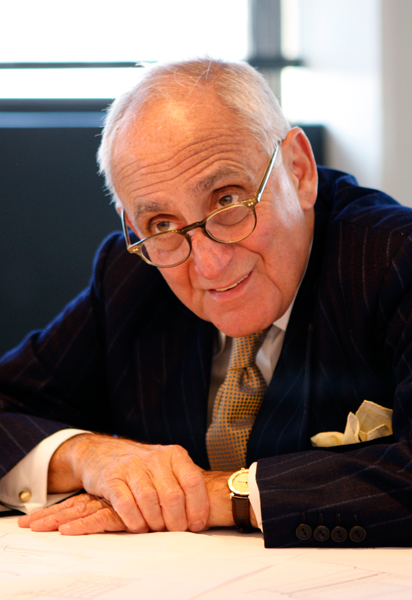 Internationally known architect, interior designer; author, scholar, teacher, essayist; industry spokesman, award winner; subject of monographs and exhibits; corporate board member, civic and cultural activist; theorist, pragmatist, trend setter–all this and more is Robert A.M. Stern. Most of the foregoing emerges from the voluminous data listed in his curriculum vitae; some derives from gleaning based on reputation.

was founded by the eponymic senior partner about 45 years ago, following affiliation with Richard Meier. Today Stern and his 15 partners run an office of more than 300 people, designing residential, commercial, and institutional projects in Europe, South America, Asia, and throughout the United States.


Stern’s long list of completed projects includes the record-breaking 15 Central Park West in New York, the 57-story Comcast Center in Philadelphia, and the George W. Bush Presidential Center in Dallas. Mr. Stern is the 2011 Driehaus Prize laureate and in 2008 received the tenth Vincent Scully Prize from the National Building Museum. In 2007, he received both the Athena Award from the Congress for the New Urbanism and the Board of Directors’ Honor from the Institute of Classical Architecture and Classical America. He holds BA and M.Arch. degrees from Columbia and Yale universities respectively and has served as the Dean of the Yale School of Architecture since 1998.

Unlike his formidable biography, Mr. Stern is informal in demeanor. He often omits honorific status letters after his name. Nor will he single out his favorite book by or about him, or pick the project that pleased him most–it would be like asking a parent to identify his most liked child. Leisure time diversions? Writing—including a renowned five-volume history of architecture and development in New York City, a category-buster on planned garden suburbs, and two volumes of collected essays. Travels are busmen’s holidays as his mind and eye never stray from buildings. But having been able to reach the professional standing where he can function as architect and historian and teacher-that, he says, is his great love.