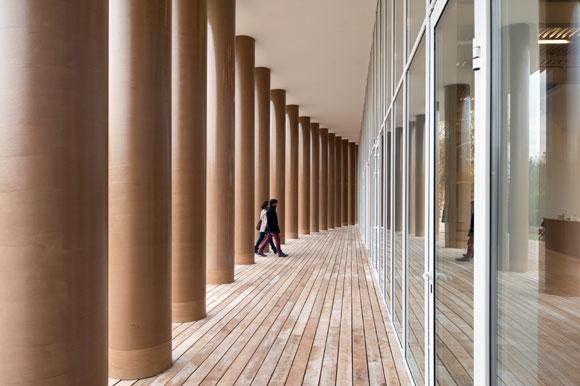 The columns of Shigeru Ban’s cardboard structure reach nearly 25 feet high and were made from cardboard recycled locally in St. Petersburg, Russia.

’ latest design is an 8,000-square-foot oval pavilion in Moscow’s Gorky Park. Typical of Ban’s legendary paper structures, it features an exterior wall of tubelike columns made from locally recycled cardboard and was designed specifically to shelter the

current exhibition, “Temporary Structures in Gorky Park: From Melnikov to Ban,” on view through December 9.

The show includes rare archival drawings that document Gorky Park’s architectural and visual evolution since it was first developed in 1923. Many of the drawings have never been seen before and will take visitors on a visual journey through that early era to Russia’s 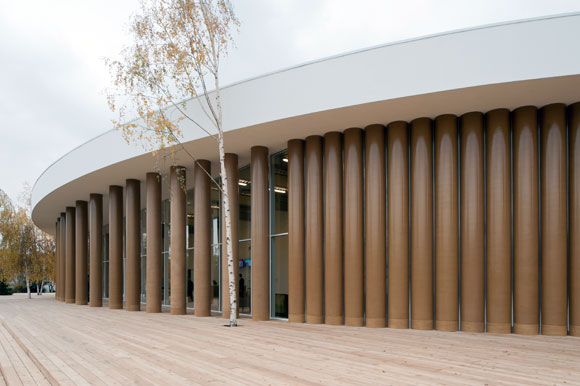 “I was interested in working in Russia first and foremost because of Russia’s culture, architecture, music and art and due to its geographic connections with Japan,” says Ban. “Although Russia and Japan are neighbors, we have very different cultures. Garage is well-known in the international art community for its progressive projects. The construction of the temporary pavilion is both efficient to construct and affordable by using local materials produced in St. Petersburg.”

Ban’s pavilion channels the rich history of temporary architecture in Gorky Park and is also a nod to his own commitment to using recyclable materials. In 1995 Ban famously constructed temporary housing made from cardboard and paper to provide shelter for survivors of a massive earthquake that struck his home country of Japan.

Ban’s newest structure in Moscow will host exhibitions and educational activities surrounding the Garage Center’s exhibition through late 2013, after which it will be dedicated to experimental projects. 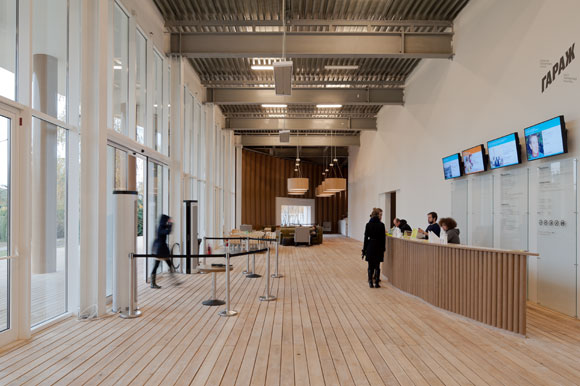