“French conceptual artist Daniel Buren introduced a new wave to contemporary art by synthesizing the world into stripes. The first time we met to discuss the idea of doing a project together—a house for a friend and me in the small village of Rossa, Switzerland—he executed a concept sketch on the restaurant bill. It was just four lines, a Swiss cross. The resulting project, Swisshouse XXXII, which Daniel and I designed in collaboration with Mario Cristiani Galleria Continua, is represented in my perspective view, which summarizes the idea of the roof, the rounded edges, and the diagonal that follows the slope of the hill. The archetypal house becomes something entirely different and extremely strong with the simple gesture of a stripe. That’s the power of Daniel’s lines, realized in the final design via vertical wood slats.

For this drawing I used printer paper and a Caran d’Ache pencil. I draw with whatever I find;
I can even sketch with oil and vinegar. When traveling, which is often, I draw with my fingers, on iPhone SketchBook. But a graphite pencil is most practical. You can have a thick, fat line or a very gentle, almost invisible one.

Better than renderings, a sketch makes you understand. When I show work to a client, I start with a blank piece of paper, and from the beginning to the end of the explanation, I don’t change the paper. You can show the entire atmosphere of a project in the same sketch, and get closer to the emotions you’ll feel when you go inside.

My mother was always doing little drawings: of people, houses, trees, flowers, butterflies. Watching this as a child is how my fascination for sketching developed. I sketch all day, all night—it’s an addiction. The most beautiful thing is when you don’t know what to draw and start without reason. And then, out of the unintentional sketch, you are surprised.” — Davide Macullo 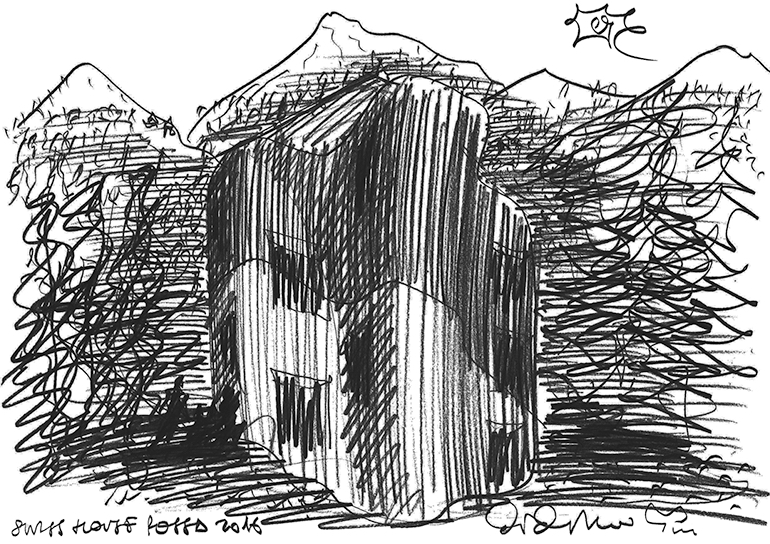 >See more from the Fall Homes 2018 issue of Interior Design