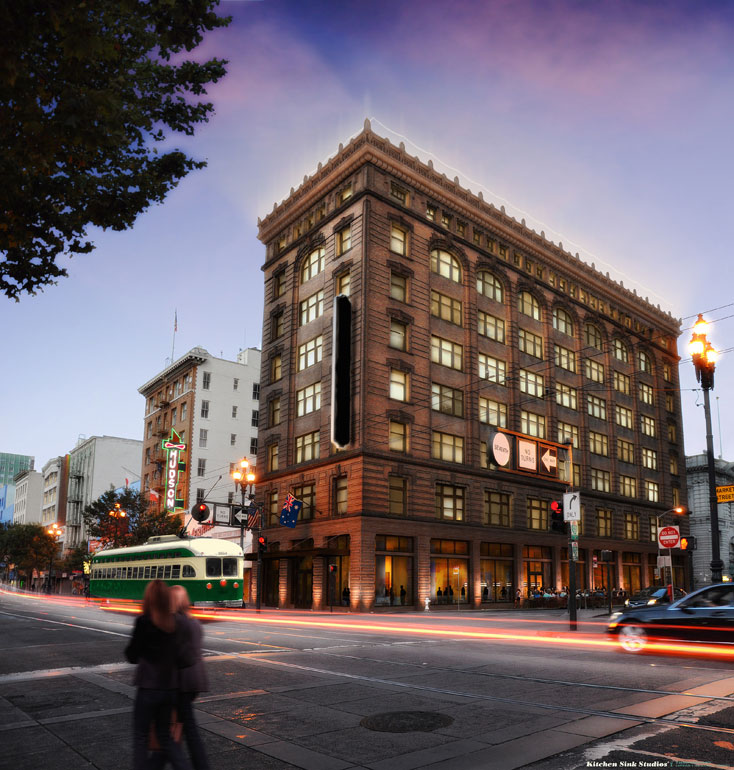 As San Francisco’s Mid-Market neighborhood continues to grow, one firm is thinking small. BAR Architects, whose previous projects include the Sundance Resort, the Aspen Institute, and the Cabo del Sol Resort, has been tasked with adapting the landmarked Grant Building into the city’s first micro-hotel. Operated by the London-based company Yotel, the new hotel will be designed to appeal to tech-savvy millennials—just the sort who already live and work in the area. (Twitter, Yammer, Dolby Laboratories, Spotify, and Uber are among the 111-year-old building’s current neighbors.)

A previous owner had already secured approvals to convert the old office building into a 125­-key hotel and nightclub. By carefully negotiating the constraints of the conditional use permit and employing creative design moves, BAR Architects increased the number of keys while keeping a similar number of beds.

“Our proven ability to fit double the amount of keys into the same square footage versus a traditional hotel is a win for all involved,” Yotel’s chief development officer Jason Brown said in a statement.

Micro-hotels first starting popping up in such densely populated cities as New York and Tokyo, where real estate is at a premium. Given that San Francisco ousted New York as the most expensive office market in 2015 and hundreds of local residents are already living in micro-apartments, tiny hotel rooms are a natural fit.

In a nod to air travel, the company refers to its rooms as “cabins,” with larger rooms marked as “first class.” Scheduled to open in 2017, the San Francisco Yotel will house 203 cabins ranging from 86 to 175 square feet. To make the most of the space, plans for the smaller cabins include loft beds, which allow for a bathroom, vanity, and wardrobe below. All rooms will feature monsoon rain showers, smart TVs, and Yotel’s signature adjustable bed, which easily converts into a sofa when guests want to work on their laptops or relax in front of the TV.

Like many micro-hotels, an extra emphasis will be placed on the common areas. Guests will be able to mingle in meeting and co-working areas, a gym, a ground-floor restaurant, and a rooftop lounge with 360-degree views of the city.

Originally designed by Newton Tharp in 1904, the Grant Building was one of the few downtown towers to survive the 1906 earthquake and fire. To help return some of the historic building’s original glamor, BAR plans to restore certain existing elements, including a marble and iron staircase, projecting cornices, and the exterior brick and terracotta. A new partial story will be inserted into the double-height lobby, and the drab ground-floor storefront will be replaced with historically compatible new materials to emphasize the grandeur of the amenities.