is a new, first-of-its-kind Web-based library of architecture, engineering and construction (AEC) applications built by and for digital-tool users and toolmakers. The new crowd-sourced site is conceived, designed and maintained by

and building and information consultancy

. The Web site aims to reach users with an interest in the evolution of innovative technologies.

According to SOM and CASE, the AEC industry is on the cusp of a major transition from a document-centric to data-centric approach to workflow. In the spirit of this transformation, the firms created AEC-APPS as a model of collaborative knowledge and technology exchange in an online forum. AEC-APPS connects tools, from snippets of code to established software platforms, and people, from educators and students to practitioners and hobbyists.

“Innovation in digital tools is changing the nature of practice, and it’s being driven by many players in different parts of the AEC industry,” says Nicholas Holt, technical director at SOM. “But they are not often aware of one another’s efforts. We saw an opportunity to bridge the awareness gap by creating a new kind of social-media hub for the building industry, where tool users and toolmakers could share ideas on equal footing.” 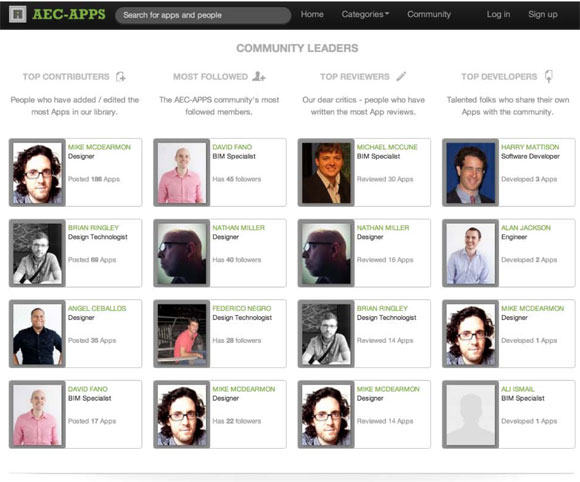 CASE Partner David Fano further explains: “With this wealth of knowledge scattered all over the Internet, AEC-APPS will exist as the primary resource for the AEC industry to not only stay up-to-date with the latest technology but to evolve their own practices as well.”