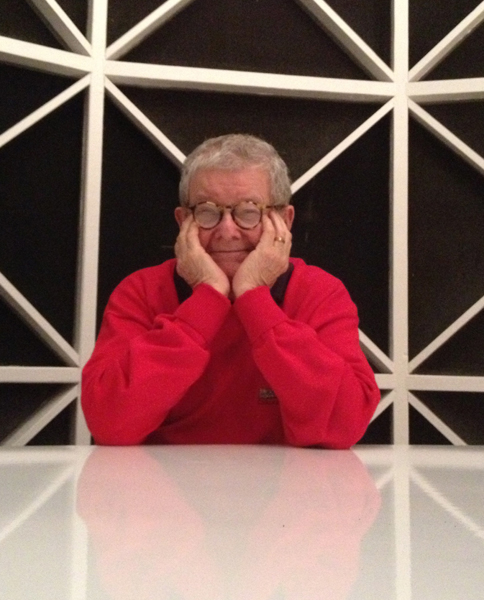 It is precisely because the achievements of this most famous present-day architect/designer couple are so well-known that the emphasis here is less on professional than on personal particulars. How did they meet, do they find it easy to work together? Responds Stanley: “Meeting Margaret was fixed up (by a professional colleague) in 1975. I pursued her like mad, and we were married four years later. On most of our jobs we work jointly, and criticize each other constantly. Actually our opinions differ a lot; as they should, because we are different people. The most satisfying job we have ever done? For me, the best one is always the next one. All right, if you insist: Our house in Michigan, which we did together.” Margaret McCurry, interviewed later (but not briefed by her husband), emphatically agrees that they disagree almost always, then proceeds to confirm everything he said. They’re both strong-minded, she admits, and tend to take different views; but after protracted tugs of war, the better idea invariably wins out. Each brings something that contributes to the success of the work. And again yes, their own weekend place is a most happy house. There is little time for extracurricular activities but working as one during days does not mean they need time apart. We’re professional and personal friends,” she concludes, noting also that she still skis and plays golf – although Stanley gave both up years ago but they do both enjoy reading, drawing and travelling toabroad.

, a Fellow of the American Institute of Architects, received both his Architectural degrees from Yale University in 1960 and 1961. He received Yale University’s first Alumni Arts Award in 1985. In 1976 he was both chairman of the AIA Committee on Design and coordinator of the exhibition and book entitled Chicago Architects. He was founding member of “The Chicago Seven” as well as the Chicago Architectural Club. In 1989 he was awarded the Dean of Architecture Award, and in 1992 he received the Illinois Academy of Fine Arts Award. In 1996 he received the American Jewish Committee’s Cultural Achievement Award. The International Union of Bricklayers and Allied Craftworkers honored Mr. Tigerman with the Louis Sullivan Award in September 2000. In 2008, Mr. Tigerman was named the recipient of the AIA/ACSA Topaz Medallion for Excellence in Architectural Education and the AIA Illinois Gold Medal in recognition of outstanding lifetime service. The Architecture and Design Society of the Art Institute of Chicago honored the lifetime achievement of Tigerman at the 2012 Modern Ball in October 2012.  In the following year, the Chicago Chapter of the AIA bestowed the Lifetime Achievement Award to Tigerman in November 2013.

He was one of the architects chosen to represent the United States at the 1976, 1980


and 2012 Venice Biennales and was part of the “New Chicago Architecture” exhibition at the Museo di Castelvecchio in Verona. In 1990, his work was exhibited at the Art Institute of Chicago entitled, “StanleyTigerman: Recent Works.” Yale University School of Architecture opened “Ceci N’est Pas Une Reverie”, a retrospective of his work in August 2011, which then travelled to the Graham Foundation in 2012. Mr. Tigerman is the recipient of more than


Stanley Tigerman’s building credits as principal design include institutional projects such as The Five Polytechnic Institutes in Bangladesh, The Pacific Garden Mission in Chicago and The Holocaust Museum and Education Center in Skokie, Illinois. He has completed both mixed-use high rise and low rise housing projects throughout the United States, as well as in Germany and Japan, and he has designed exhibition installations for museums in the United States, Portugal and Puerto Rico. His broad range of collaborative works include The Chicago Central Area Plan, the 1992 Chicago World’s Fair, and London’s Kings’ Cross and St. Pacras’ High Density Mixed Use Urban Plan and the Chicago’s 2016 Olympic Village Proposal. From the more than 400-plus projects defining his career, over 185 built works embrace virtually every building type.