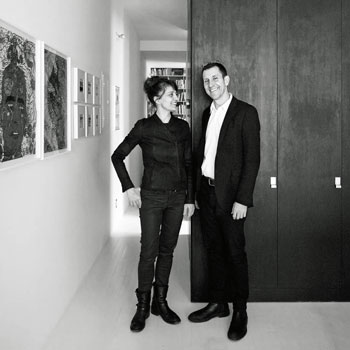 Trapezoids are an obsession for architects David Leven and Stella Betts. Their explorations of the shape took expression in “Unpacking the Cube,” an exhibition at the Chamber gallery in Chelsea. For that group show, they contributed hollow concrete trapezoids that could be assembled in different ways. Then came trapezoidal outdoor benches in Miami Beach, the couple’s own angular weekend house in Hudson, New York, and, opening in September at Art Omi, in nearby Ghent, a painted plywood pavilion named Zoid. Prior to installation, one of the six modules that make up the pavilion displaced the table typically found in the conference room at LevenBetts. This disruption delighted Leven and Betts.

It’s certainly in line with their belief in flexible spaces that give people the maximum “agency” over their surroundings, as Betts puts it. That concept comes through in designs for academic buildings at Cornell University, where Betts is an adjunct. (She teaches at Columbia University as well, while Leven is a tenured professor at the Parsons School of Design.) Their firm, located in a former printing plant in Chelsea, has also been chosen to renovate branches for the Brooklyn Public Library, construct a ground-up building in Harlem, and conceive numerous houses, about which Leven and Betts are currently assembling a book. They work at an acrylic-topped table they designed themselves—collaborating, arguing, and finishing each other’s sentences.

Interior Design: Have you finally gotten trapezoids out of your system, or are you just getting started?

Stella Betts: It’s kind of crazy how this one shape has taken on a life of its own. You can change a single variable, whether it’s scale or an additional angle, while still maintaining the planimetric organization. We like seeing how far we can push.

David Leven: And you used the word system. These shapes make a system we can work with, and we love that. At the same time, we get very nervous about a rigid system. So we create our own—then break the rules.

ID: What’s the common denominator in your institutional and residential work?

DL: We’re very interested in a building’s relationship to its site, and we’re interested in openness. It’s decidedly modernist, though we do realize the pitfalls of pinning our work to straight modernism.

SB: It’s an unusual time. Educational spaces are changing, just as workplaces are changing. There are less siloed departments. When we got the commission to renovate a computer sciences building at Cornell, they described the project almost like it was for Google. It was all about collaborative spaces—lounges and café tables. That was super-exciting for us, because it was a way to not think prescriptively. . .

SB: We’ve taken similar approaches with libraries. We organize them so there’s not so much a back-of-house where the staff is separate. We’re interested in removing corridors, how that changes interaction.

ID: What about circulation at the Harlem building?

SB: The main move of this project—which is 300,000 square feet, the largest in our office—is a mid-block pass-through that is pretty much public. Anyone on the street can walk through.

DL: So the “front” door is actually on the side of the building. . .

SB: . . .facing the garden passage. We spoke with the developers about how important that was in terms of the larger context.

ID: And your houses?

SB: There are opportunities to think about how you organize interior space without locking it into something too specific. Does a bedroom have to have spatial qualities that are different from a living room’s? We often talk in the terms of real-estate listings—high ceilings, lots of light. That’s what we can provide, spaces you can use however you want.

DL: Then, also, how do you shape that space? That’s when it gets really exciting. It turns a house into habitable sculpture.

ID: How did the house book come about?

SB: We took a step back and realized houses were a pretty significant portion of our practice. It has been a luxury to investigate architecture at that scale.

ID: You’ve said that you aspire to creating houses that are akin to campsites.

DL: We look to reduce things to radical degrees of informality, if we can. So much in our environment pushes us toward formality and a level of finish that we feel divorces us from nature, from others. We try to get back to a degree of rawness.

ID: You’ve gone so far as to compare bathrooms to outhouses.

SB: It’s probably a funny way to sell a bathroom. But what if every single room in the house, including the bathrooms, had a relationship to the site, with a door to the outside? We don’t privilege one space over another. Secondary spaces aren’t secondary to us.

> See more from the September 2018 issue of Interior Design