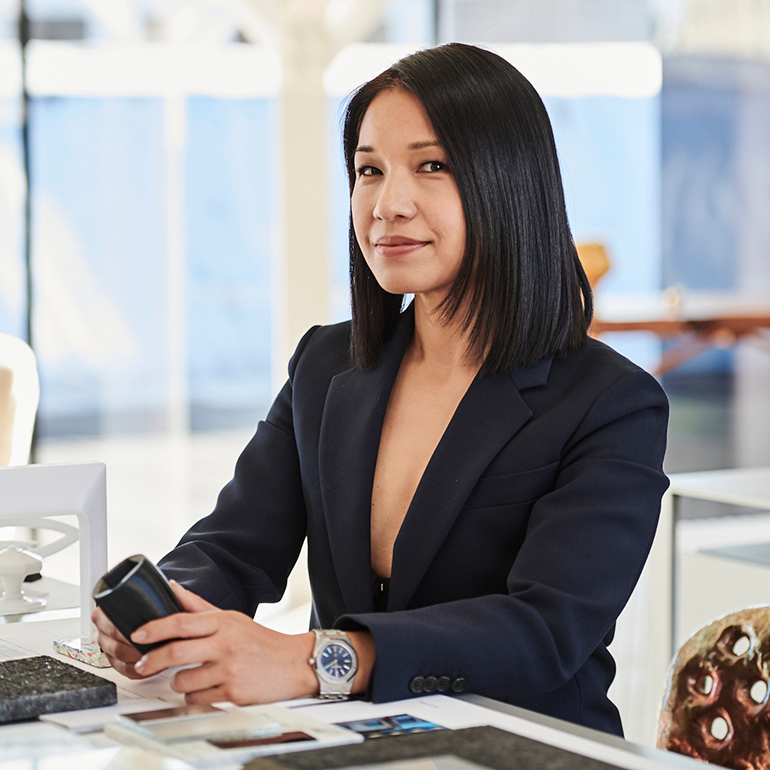 On today’s episode of Hello Cindy! the Interior Design Editor in Chief (@thecindygram) caught up with her friend Stephanie Goto. As soon as Goto logged on, she and Cindy Allen got right to thanking first responders.  The two New York gals are currently residing in more pastoral places, but the city remains in their hearts’ core.

Ten years into visiting Roxbury, Connecticut, Goto found herself a place in the town where Alexander Calder set up his first studio in the 1930s. “It’s bucolic and country,” she says of her home, formerly inhabited by Arthur Miller and Marilyn Monroe. Calder, Miller, and the other famous residents of the town, like William Styron, “came here to be reflective,” Goto said, much like her current circumstances. The small colonial home has grown over the years through its various owners. “It’s an architect’s lifetime project,” she gushed from Miller’s former study, which he decorated with deep wood panels. “More than ever, this time has got me to think [reflectively] and be thankful.”

Meanwhile in New York, Goto can mostly be found in her penthouse office complete with a rooftop studio—”meditative space on top of a bustling city” is how she describes it. Although it’s empty right now, Goto is still working with fabricators, designers, and institutions around the world. The small, locally-based makers and artisans are “who I want to really develop a relationship with right now,” Goto said about supporting her A&D peers. Allen drew attention to Goto’s work with Morgenstern’s Finest Ice Cream, coming up in the fall. Always interested in the relationship between food and space, Goto has been keeping in constant contact with her chef friends who, despite multiple restaurant closures, are focusing on what and how they can contribute to their communities.

“My practice is in the intersection of culture, experience, and design” Goto says, working on and trying to create what she calls “the experiential.” Her clients include galleries, which now also consider hospitality and restaurant design although that may change in the post-coronavirus world. Allen asked and Goto answered: How we gather is definitely going to take a big step in the virtual direction. In fact, one of her clients has a virtual gallery launching from an island tomorrow! In the meantime, she enjoys taking a break from rushing around.

“Why do we get stressed out when we talk about health and wellness?” Allen asked. Goto’s response is that it’s all about soaking up the feeling we get from the joys of life, from sunshine to fresh vegetables—not focusing on sources of worry. Creativity equals energy and now’s the time to push that limit without worrying about what Allen calls “deadline energy.” This time “has allowed me to focus on what’s really meaningful,” Goto said, “there’s a lot of humanity—and I don’t think that’s been missing from our world—but we can transform what it means.”