Sustainable Future: Cities are the Solution

Cities are the future. And the future looks eco-bright because cities—contrary to popular belief—are microcosms of positive sustainability since they use less resources, less energy and less overall “stuff”. And since the biggest activity we as humans will be undertaking in the next several decades (aside from dying and being born, that is) is to build and expand cities, the Earth may just have a chance to survive intact.

The outlook is not so grim, according to

, a Planetary Futurist who globally beats the drum about sustainability and social innovation. As he told the 65 designers, hotel owners and manufacturers gathered for

in New York: “I look at the planet and how our relationship with it is changing.”

Introduced as a “provocateur” for his often game-changing statements on sustainability, Steffen took the podium as the keynote speaker at Futuregreen. Attendees gathered at the

—with its certified gold

rating and emphasis on farm-to-table dining (complete with a garden and chickens on the roof)—to hammer out some positive steps to effect change via sustainability in the hospitality industry.

With this in mind, the forum’s goal was to educate, provoke and ultimately end with a list of initiatives that the group would walk away with and try to accomplish in any way they could. Last year, the design firms left with one initiative: Try to do one project that was locally sourced. Michael Suomi, principal of

and founding member of Futuregreen, did just that with the

. (For more on how this was accomplished, go

This year, the attendees were interested in looking for ways to incentivize builders, designers and even guests for becoming more sustainable, for thinking beyond the bottom line. (But never totally forgetting it.) Underscoring the need to change, Steffen stressed a universally acknowledged truth: “We live on a planet that is limited. We also have a rapidly growing population.” 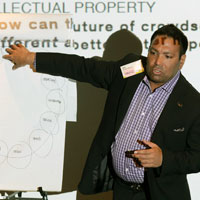 As a result, how we live, work

and play will have to change to ensure that the planet is capable of sustaining the ever-growing population. Although the forum had some initial challenges in regards to future sustainability that were presented to the audience, the group took these and expanded upon them before breaking into small working sessions to come up with solutions. The groups (or tables as they were called) presented their top ideas and the

then ranked them with the top three receiving prizes. The top ranked “solutions”:

Third Place: A “Wiki-Leaks” for hotels with sustainable pros and cons on display for all to see. Dan Ryan of

and Raj Chandnani of

, presented for their group, Table 2, which named itself “Naked.” The one thing Chandnani acknowledged upfront was that “you have to get everything else right [at a hotel] so that sustainability is appreciated.”

presented for her group, Table 7 or as they called themselves, “Lucky 7”. The idea would be to create an app that would keep score of consumers’ “green” points and give these guests a bonus (points or beverage/food credits, for example) for being tops in sustainable behavior while at the hotel or resort.

would rank or give out prizes to manufacturers with the most innovative or sustainable products/ideas. Ari Gasner of

presented for his group, which was called “Top to Bottom”. The goal would then be for hotel owners to have access to this information and to agree to use these award-winning products/ideas in their builds.

After handing out the prizes and congratulating the winning groups, the Futuregreen board challenged the audience to try at least one of the initiatives talked about during the forum. In addition, attendees were urged to spread the word and get more members of the hospitality industry to sign the


The Myths and Facts of Building Locally with Michael Suomi

Snapshot of the Industry: Recent and Future Green Builds