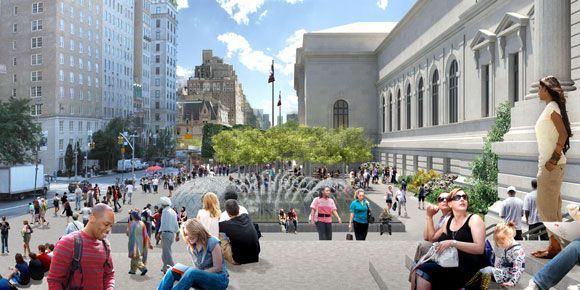 OLIN will plant bosques of London Plane trees and ariel hedges of Little Leaf Linden trees on the north and south sides of the famous grand stairs. Image courtesy of OLIN.

The new David H. Koch Plaza for the

in New York—with a $65 million budget funded in full by its namesake conservative activist—will offer a pair of new fountains, permanent and temporary seating areas, and new LED lighting installed on the façade itself. The museum—famous for its historical treasures, from the Temple of Dendur to Impressionist landscapes—broke ground this week a renovation spanning the four-block outdoor plaza at its entrance. 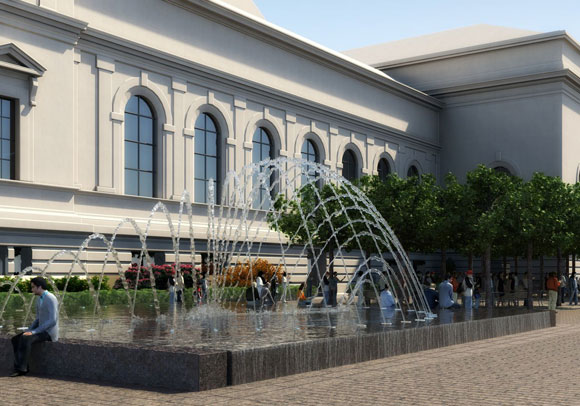 “The plaza is designed to be bilaterally symmetrical, like the composition of the Richard Morris Hunt-designed façade,” explains Dennis McGlade, partner at OLIN, who served as lead design consultant for the project. “The two end wings of the museum, designed by McKim, Mead, and White, are fronted by alleés of trees pruned into aerial hedges. In the space between the aerial hedges and the façade of the museum are granite benches sheltered by large parasols which can be raised or lowered as necessary for shade or rain protection.”

Not all the changes will happen above ground. A subsurface tree pit design, McGlade says, will “double the number of trees planted onsite. Rainfall that reaches the plaza will be collected in the continuous planting soil pits, where the water is filtered, detained, and re-used by the tree’s roots. This drastically reduces amount of stormwater that is released into the aging city storm drain system.”

The plaza, classically-inspired and sustainability-minded, is slated to open to the public in fall 2014.