The Real Deal: Michael Phillips is an Unrepentant Design Junkie 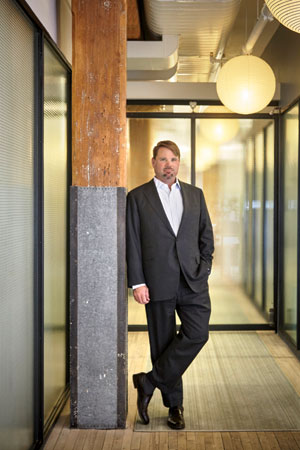 Managing almost $8 billion in real-estate assets is a serious respon­sibility. But Michael Phillips doesn’t get bogged down in the numbers game. As pres­ident of the property operator

, he loves subverting expectations. “I look for non-obvious solutions,” he begins. “My main goal is to surprise and delight.”


First appointed as the company’s creative director, he put its logo, a stylized U.S. map, on the front doors of almost every building, an act that planted Jamestown in the collective unconscious. He only became bolder from there. “I’m driven by creativity. Design thinking is at the center of everything we do,” he says. To build out the public spaces of office buildings, he’s hired such blue-chip firms as

. It was the latter, paired with the boutique firm

, that was named an


Phillips’s own office, where he oversees everything from graphic elements to a building’s entire purpose, is at New York’s

. Originally a Nabisco factory—Oreos were invented here—it has become a mixed-use phenomenon, thanks largely to Jamestown. An Anthropologie, Corkbuzz Wine Studio, and L’Arte del Gelato are among 46 shops, bakeries, and restaurants on the ground level, beneath seven stories of offices with tenants including Google and the TV station NY1. Ask Phillips an architecture question, and he darts away to pull the relevant illustrated volume from his office’s packed bookshelves. More shelves display a collection of gourmet packaged food with apothecary-style labels, evidence of recent conversations with

about a concept lifestyle store opening this fall at a new property in Atlanta. A former Sears, Roebuck & Company warehouse, it’s being transformed into

by a team of five firms.


Taking a personal interest in the acquisition of landmarked properties, he has been known to select interior finishes for projects and even to choose contractors. As a client, he has the gift of thinking like a designer. It all started in the 1990’s with a visit to the industrial flatlands of Berkeley, California. Redevelopment there had produced an innovative alternative design district, and Phillips decided to build an Atlanta version. The anchor tenant would be. . .himself, more specifically a headquarters for the tabletop line that he had launched with his life partner, interior designer Dominick Coyne. At the time, the pair exhibited at

in Paris and sold to Barneys New York.


Years later, Phillips has acquired a Berkeley site for Jamestown. Another recent addition to the port­folio is next to an existing property, the

will house not showrooms but light industry, for instance drapery workshops. “We now have all this space to create an amalgamated resource concept,” he explains.


That same emphasis on artisanal manufacturing serves as the cornerstone for Industry City, a massive re­development in Brooklyn, New York. The 16 hulking high-rise buildings, on a previously lonely stretch of waterfront, are already buzzing with new life, including a

workshop-showroom. Opening soon is a Maker’s Guild, a craftsmanship-business incubator already established in Boston. The making in question occurs in full view of customers, with the results offered for sale.


Back at Chelsea Market, the peripatetic Phillips reappears in his office following a quick appearance on NY1. Our interview then moves to the building’s loading dock. We climb into an SUV, and the driver speeds us to a meeting of the Times Square Alliance. It turns out that Jamestown owns 1 Times Square. This is where the ball drops on New Year’s Eve, and Phillips envisions launching a tourist attraction on that theme. Cue the confetti.