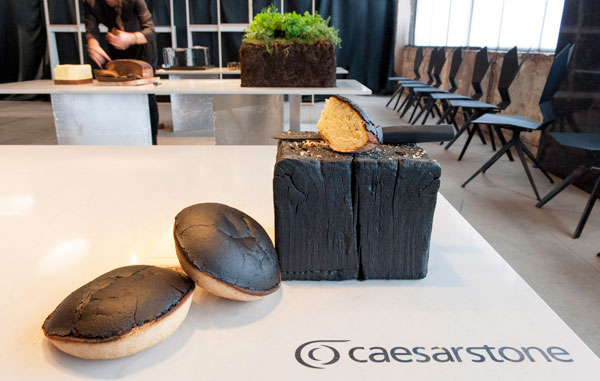 At the press breakfast, edible curiosities representing the four elements were presented on Caesarstone slabs. Photo by Ruth Ward.

Quartz surface specialist Caesarstone has announced a year-long collaboration with Tom Dixon that will see the London designer create kitchen concepts for events scheduled throughout 2016 in several global cities. It is the first time the Israeli company’s Designer Program, which has previously presented projects by Raw Edges, Nendo and Philippe Malouin at Milan’s Salone del Mobile, will span multiple locations including Toronto, New York, London and Milan.

Intended to showcase the practical qualities of Caesarstone’s engineered quartz, and in particular its applicability in kitchen environments, the project will explore ideas around growing, cooking, preserving and eating food. The design concept is based on similarities Dixon perceives between the work of designers and alchemists, and will focus on the fundamental elements of earth, fire, air and water. The first kitchen presented at the Interior Design Show (IDS) Toronto in January will feature a series of angular units influenced by Canadian ice fishing, with food floating across frozen surfaces. “I wanted to do something that tries to enhance the actual use of the surfaces,” said Dixon, “so I started thinking about different cooking traditions and the different ways people across the globe use surfaces to cook.” 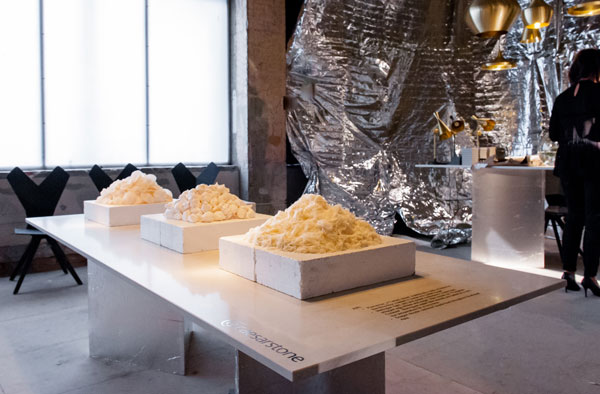 The breakfast was catered by Italian food design studio Arabeschi di Latte, which will be consulting on the entire program. Photo by Ruth Ward

The collaboration was launched at a breakfast on Thursday at London’s Old Selfridge’s Hotel, where Dixon has taken up residency for a month and curated an exhibition called Multiplex that explores potential directions for the future of retail. The breakfast was catered by Italian food design studio Arabeschi di Latte, which will be consulting on the entire program. Edible curiosities representing the four elements were presented on Caesarstone slabs, including a block of soil with herbs growing from its surface and a burnt cheesecake from the Poitou-Charentes region of France.

Speaking at the event, Caesarstone CEO Yos Shiran pointed out that strong international growth and increasing brand awareness in new territories informed the decision to develop a project with worldwide scope. “We want to explore different interpretations of kitchen culture in various countries and cities,” said Shiran. “We gave Tom an open brief and we don’t know what the outcomes will be, but we do know they will be very different from country to country. We’re looking forward to seeing what he comes up with.” 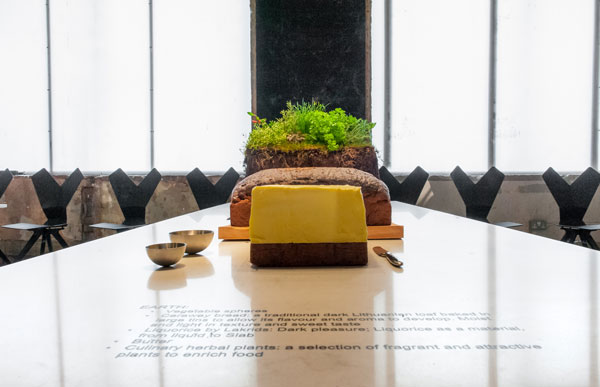 The display included a block of soil with herbs growing from its surface and burnt cheesecake from the Poitou-Charentes region of France. Photo by Ruth Ward.