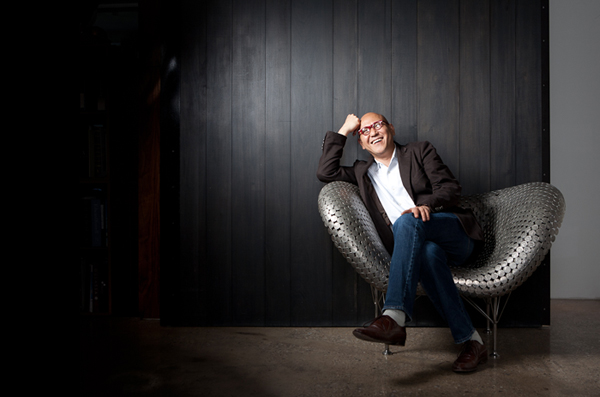 Tony Chi distinguishes himself from other designers because of his temperament. He is a perfectionist; meticulous, unwavering and possessing an intensity that provokes emotion, never allowing indifference. His design transcends ephemeral curiosity entertained by the surface of things. He understands that design without functionality is hollow and functionality without people who care to utilize it defeats the purpose. In his own words, “any designer can create a dazzling body but I want to create spaces that have a chance at building a soul.” He doesn’t merely deliver aesthetics, he delivers an experience.

is indeed known for attention to detail, for orchestrating rich compositions of shagreen and lacquer, aqueous glass mosaics and textured wood veneer, supergraphic-laminated glass and prismatic mirror. Yet to focus solely on such things would be missing the point. For Chi believes in what he calls “invisible design,” the notion that, much like good service, a hospitality space should elicit a positive response without necessarily making you aware of why.


Passionate, discriminating, exacting, and, yes, sometimes “dictatorial,” he admits, he brings a rigorous understanding of what makes restaurants work. (He’s owned a few himself.) “What I do is design order,” he says, and that extends to how the customers sit, what the kitchen cooks, and the way the waitstaff serves. Consider his signature glass-encased wine chillers. Introduced in 1997, they made a seamless performance out of pouring drinks-back when most sommeliers were still running down to the cellar.


A master of hospitality design who started out with restaurants, Chi has worked with such chefs as Wolfgang Puck, Alain Ducasse, and Michael Mina. Chi has also completed hotel interiors for the likes of Park Hyatt, InterContinental and Mandarin Oriental.


From the hundreds of Venetian glass spoons at Ducasse’s Spoon restaurant at the InterContinental Hong Kong to the brownstone partitions at MObar at the Mandarin Oriental, New York, Chi instills a reassuring sense of place while deftly commanding every aspect of an immersive experience. You enter the Park Hyatt Shanghai through a dramatic procession of scale-shifting spaces, reminiscent of Chinese courtyard houses, before being whisked up to the impeccably considered guest rooms. Each of the latter has its own housekeeping closet, so you don’t have to hear carts clanking down the halls.


Born not in mainland China but in Taiwan, the youngest of five children, Chi was 6 when his family moved to the Lower East Side. “A pretty rough place,” he recalls. By junior high school, he was making sketches of hot rods and selling them for 25 cents apiece. After graduating from FIT-which earlier this year awarded him an honorary doctorate-he worked for Charles Morris Mount Design before going off on his own in 1984. Around that time, he and his wife and business partner, Tammy Chou, opened their own Hunan-Szechuan restaurant. (It closed in 1996.) Restaurants run in the family. Chou’s parents once owned the city’s three vegetarian Zen Palates, which Chi designed.


If his entrepreneurial spirit taught him the business of hospitality, it was the stock-market crash of 1987 that got him thinking globally. Finding himself wanting to diversify, he headed to Taiwan and, soon thereafter, to Hong Kong, where he met restaurateur Paul Hsu and real-estate developer Allan Zeman. Before long, the trio was transforming the island’s Lan Kwai Fong district into the entertainment destination it is today. Chi was on his way to becoming an international design star.