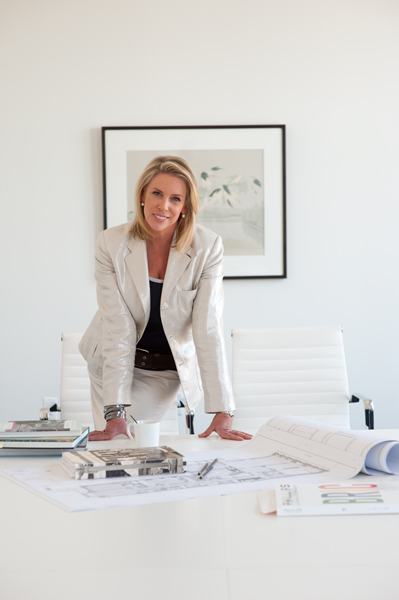 ‘s interiors defy quick categorization. They are neither strictly traditional nor strictly minimal-what they are is intelligent, classic, and calming, a fresh mix of sophisticated colors, textures, and shapes. Where some designers might stick to a prescribed list of dos and don’ts, this one sees an opportunity to do her own thing. “You can respect the rules but also make your own,” she says. “I like a space to be beautiful. And a touch unexpected.” The unexpected might materialize in the unusual curve of her own wing chair or an eclectic pairing of furniture. She’s been known to place a 1960’s dining table by T.H. Robsjohn-Gibbings in a room with traditional crown moldings, and she finds equal appeal in molded-fiberglass mod and arts-and-crafts organic. With Hagan at the helm, such complex combinations not only work-they shine.


Her point of view, she says, is based on simplicity and comfort. Simplicity makes itself evident again and again in her clean lines and restrained use of embellishments. As for comfort, she designs her rooms to be used, walking a fine line between stylish and livable. Both of these qualities are manifested in projects that run a distinguished gamut from high end residential, corporate, and hospitality projects.


Hagan’s distinctive sensibility developed at a very young age. “I always wanted to improve things,” she says with a laugh, recalling an early memory of peering out of her crib to examine the floor of her bedroom.


Growing up in the Hudson Valley town of Pocantico Hills, New York, this budding interest was fostered by visits to local architectural treasures such as the town’s Union Church, with its stained-glass windows by Henri Matisse and Marc Chagall. A family trip to Monticello, Thomas Jefferson’s house near Charlottesville, Virginia, provided further inspiration as Hagan began to think about design as a profession.


After receiving her BFA from the Parsons School of Design in 1984, she apprenticed with interior designer Simone Feldman. It wasn’t long before mentor and novice became partners-and before the two were participating in industry events such as the Kips Bay Decorator Show House. When Feldman died in 1991, Hagan established her own New York firm,

. “There’s just nothing better than being surrounded by the excitement and energy of the city,” she says.


The mother of twin boys, Hagan is also on the board of governors of Parsons, and her impressive credentials don’t stop there. Her ever expanding eponymous collection of furniture and fabric “new American classics,” as she calls it, further illustrates her preferences for strong silhouettes, tailored upholstery, and innovative textures. Like the rooms she creates, lines are elegantly understated, and pieces were born to mix well. Hagan’s keys to interior design? Pay attention to details. Listen to what you hear and perhaps most important: Have fun with it.

>>Back to All Hall of Fame Members