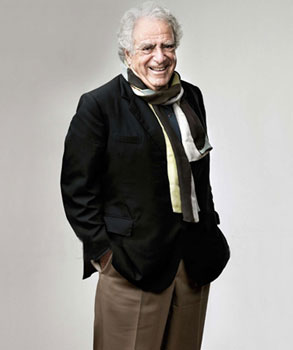 came to the United States in 1938. His earliest focus was on painting and sculpture but in his formative years he became exceedingly attracted to architecture and design. He studied Architecture at Columbia University and in 1947 joined his father, Illi Kagan, a master cabinetmaker, to work in his woodworking shop and learn furniture making from the ground up.


It was his Russian father, an accomplished furniture-maker and sculptor, who insisted that Vladimir Kagan learn to draw and thus to design. Instead of English country-house seating with “down cushions that you slush into,” he says, he sketched “female shapes” to envelop the body. He exposed and streamlined chair frames, choosing walnut because he found that the grain looked “delicious” when massaged with steel wool and tung oil-and also because walnut is strong enough to arc like a slender tree branch.


Vladi, as he is known, has always worshipped both nature and art. Scraps from making the walnut frames of 1953’s Contour chairs were passed along to his friend Louise Nevelson, who used the pieces to fill cubbies in her sculptures. Meanwhile, his sculptural room-filling sofas responded to the needs of collector customers when monumental abstract canvases bumped furnishings away from the walls.


Kagan says he hates seeing friends sitting on long sofas “like sparrows on a telephone line.” Introducing curves let him pack 20 feet of casual seating into a 6-by-8-foot footprint. The resulting heft required piano movers and mechanical hoists for some deliveries. One mammoth free-form sofa for a Massachusetts house by Walter Gropius was hoisted up and through the living area’s window.


When the Gropius house sold to a traditionalist, Kagan took the sofa back. Its next stop was Museum of Modern Art patron Barbara Jacobson’s New York town house. Finally, Jacobson put the sofa up for sale at auction at Christie’s, and cosmetics scion Ronald Lauder paid what Kagan calls the drop-dead price of $192,000. (Reproductions sell for $40,000 to $50,000 today.)


Kagan is responsible for countless classics, including a line of much-coveted outdoor furniture. He even designed a high-rise apartment building that may someday rise a few miles downtown from his own New York apartment. Once he’s dead, he suggests puckishly, people may finally decide that he was “pretty good.”


Of course, he’s bending reality to make his point. We all know that he’s been vastly better than “pretty good” for longer than many of us have even been alive. As a testament to that, Ralph Pucci International, which had never repped Kagan furniture in all his decades of designing it, just launched a fiberglass chair based on one of his sketches from the 1950’s.


Free-form seating has become a Kagan signature. He’s not only about curves, however. As fashion designer Tom Ford notes in his introduction to The Complete Kagan, his architecture training partly explains the straight lines and cantilevers of the Cubist chairs, used by Gabellini Associates for the Nobu restaurant at the Giorgio Armani flagship in Milan. And then there’s the Omnibus modular seating, which Ford bought for his own New Mexico house and Studio Sofield installed at 360 worldwide Gucci stores. Set on Kagan’s characteristically transparent acrylic legs, the Omnibus seating appears to float, an effect enhanced by the tiny lightbulbs mounted on the underside of the frame-as soon as the sofa’s power cord is plugged into an outlet.


Kagan has an entertaining 1990’s snapshot of an unfinished Omnibus for the lobby of the Standard Downtown LA hotel. The rain-soaked maple frame is sitting behind his factory in rural upstate New York, near Binghamton, as free-range chickens peck at the damp gravel beneath. Omnibus installations, it seems, are not so much seating as landscape. Kagan compares the multi-height platforms to the stony outcroppings where he used to sit with friends, overlooking a waterfall in the woods.Early commissions included the Delegate’s Cocktail Lounges for the first United Nations Headquarters in Lake Success N.Y. (1947-48). In 1948 he opened his first shop in New York on East 65th Street and moved to fashionable 57th Street in 1950. His clients are luminaries in the world of art, theater, music and industry.


Connoisseurs and museums are avidly collecting his designs today. Kagan’s furniture is in private collections worldwide. His prize-winning designs have been published in books and magazines internationally and are in the permanent collections of the V&A London, the Vitra Design Museum and Die Neue Samlung in Germany as well as in the most prominent museums in the United States.