What do Hip Hop and Architecture Have in Common? 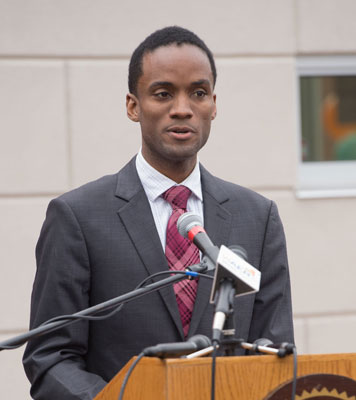 Hip-hop and architecture are two words that rarely find themselves in the same sentence, but a group of creative minds at Syracuse University’s School of Architecture is hoping to bridge the gap. On March 19 and 20 the university will host

“Towards a Hip-Hop Architecture”

, featuring presentations and panel discussions by a variety of historians, professors, architects, and others in the A&D and hip-hop communities. Highlights include programming called “Close to the Edge: Hip-Hop Architecture Theory,” “Respect the Architect: Hip-Hop Architecture in Practice,” and “Down on the Corner: Hip-Hop’s History with Architecture.”

hip-hop architecture? Sekou Cooke, an architect and assistant professor at Syracuse’s School of Architecture describes it as “something that’s aspirational and emergent.”


“It’s an understanding that hip-hop culture grew out of certain architectural conditions, such as the modernist project blocks [found in urban areas],” Cooke says. “Hip-hop was a response to the drab nature of those spaces, and those spaces needed to be tagged, defaced, and used in different ways. It was the basis for new ways of thinking and living in that world.”


Cooke adds that, in recent years, a number of hip-hop artists have become interested in architecture, including rapper/producer Kanye West, who gave a talk on the subject at Harvard while Cooke was a grad student there.


“When the architectural community found out, there was an outcry,” he says. “We as a student body decided we wanted to engage with Kanye. We wanted to find out how this discussion could benefit both architecture and hip-hop. After that discussion I started writing about the topic myself, and now a major part of my research at Syracuse is on the intersection between hip-hop and architecture.”


In addition to Cooke, other symposium speakers will include Rashida Bumbray, an NYC-based curator and choreographer; Lawrence Chua, an historian and assistant professor at Syracuse University; and Michael Ford, a Detroit-based designer.


The symposium is free and open to the public. For a list of events, go