Where Are They Now: Andrée Putman

The Parisian design icon, now 87, began her career in the late 1940s and has left an indelible mark across several continents with interiors that include chic designer shops, trendy boutique hotels, art house films (Peter Greenaway’s The Pillow Book ), the Bordeaux Museum of Contemporary Art, and even the Air France Concorde. Her daughter, Olivia Putman, who now runs Studio Putman , helped to answer our questions by referencing quotes provided by her legendary mother over the years.

Andrée Putman: I would say [it has evolved] a feeling of freedom and simplicity, sometimes almost hiding elegant details that you notice later in time…I often say that it has to be omnipresent in its disappearance. 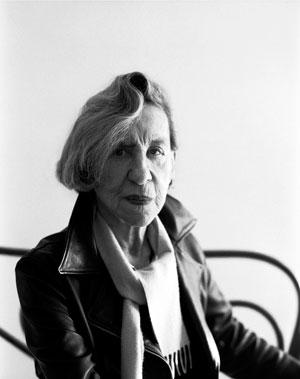 ID: You are known and respected as an innovator. Which widely accepted design rules are your favorite to break-and why?

Andrée Putman: Basically, I always try to reconcile poor and rich materials. It is an anti-ghetto and nonconformist idea about the arrangement of space and light.

ID: What was it like to refresh Morgans Hotel in New York, 28 years after your groundbreaking initial design in 1981? How did you enhance your legendary checkerboard patterns?

Andrée Putman: I have not changed the essential elements, which have worked from the start. The new Morgans combines the friendly, sheltering low-key elegance of the old Morgans with some surprising new whimsical touches, such as a fully interactive light installation in the lobby. It’s the day-to-day experience of this hotel that makes it special.

ID: In 2007, you designed The Putman Hotel in Hong Kong. What element of this 28-room boutique property that bears your name are you most proud of?

Andrée Putman: The doubts that come when daring something very new like putting the reception on the top floor or using stained glass on a facade. I am also very proud to have centered the apartments along two large corridors that I call  “sidewalks.” They make two axes with the kitchen, the dining room, the bedroom and the bathroom. It creates a real promenade.

ID: What do you consider your most iconic furniture designs?

Andrée Putman: I know it is hard to decide what in one’s work is iconic, but I think my Elephant bench and my Crescent Moon sofa are quite representative of my work because of their efficient elegance.

ID: What influenced your 1993 redesign of the interior of Air France’s Concorde?

Andrée Putman: Nothing was more simple, healthy and honest than this job. It was done just after the first Gulf War. I introduced austerity and fresh details, changed the light and simplified the lines of the luggage boxes. Although it was simple, that changed everything.

ID: You have had many friends who are artists. How much of interior design is artistic expression and how does that affect your design?

Andrée Putman: The artist always looks at the past while thinking about the future. Some people calculate and constantly search for the latest trends, but that’s not my objective. My goal is not to win prizes or earn approval. I use my feelings and my mind to access a bazaar of different styles and concepts.

ID: If you could redesign one famous space in Paris, what would you choose?

Andrée Putman: La Samaritaine [the famed First Arrondissement department store that is now being renovated into a hotel and residences].

ID: Over your career, your work has been called everything from “bizarre” to “elegant.” What one word do you think best describes it?

Andrée Putman: Eclecticism: This is the word for the choices I make. I like the idea of being irreverent and free.

<<Back to main article

Where Are They Now: Eva Jiricna

Where Are They Now: Bruce Bierman

Where Are They Now: Neil Denari