Where Are They Now: Neil Denari

The Los Angeles-based architect, age 55, has been a career academic and author. But in a mid-life burst of high-profile projects such as 2011’s HL23 residential tower in New York, his firm, Neil M Denari Architects , is now leaving a distinct mark on the urban landscape. Denari was inducted into the Interior Design Hall of Fame in 2010.

Interior Design : You have had a rather unconventional career – you are a teacher, author and architect. How does each pursuit drive the others?

Neil Denari: First and foremost, I am architect. But at the same time, the teaching and the writing are not secondary. . .[O]ur main concern with our work, in addition to solving problems in hopefully elegant ways, is that it help advance the global conversation on architecture. We try to address the issues of the day, whether formal, cultural, or socially driven. With the teaching, I can engage for instance in urban research, gaining insights that ultimately inform what NMDA does with its own large projects. 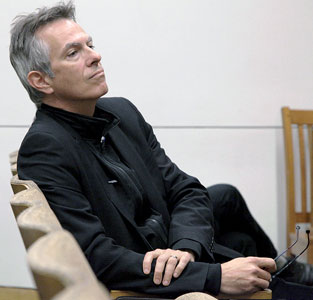 ID: You spent a great deal of time teaching and working in both the U.S. and Japan before your mid-career breakout in the U.S. How did Japan influence your approach to urban design?

ND: My experiences in Japan (and now in Taiwan) have been profound. I first went in 1990 and lived there for the better part of a year, until the March 1991 collapse of the Bubble Economy. So I witnessed the end phase of the euphoria of that period, and now 20 years later, I have seen the country fight through a lost decade and another 10 years of struggle to retain its economic status. Despite all this, as a foreigner, the country has still provided me with valuable lessons, such as the economy of space, the need for reliable infrastructure, and the cultural histories of craft (building, fashion, industrial and graphic design, etc.). The essence of this would be: “build smaller, build better.”

ID: After the L.A. Eyeworks boutique, your first major U.S. commission was in 2004 for the L.A. headquarters for Endeavor Talent Agency. What inspired that concept and what did the result mean to your career trajectory?

ND: The Endeavor project was a breakthrough on many levels. At 70,000 square feet, it was sizable, and with a client who let us have the “final cut” so to speak, we could carry out spatial research that had started in the mid-1990s. We were perfectly positioned to give the clients what they wanted, which was an environment that was the equivalent of their brand as the maverick talent agency, the one willing to bend the rules of the old-school customs of that industry. Most agencies preferred to look like attorney’s offices. Endeavor wanted to look like the New York Stock Exchange, all energy and movement! In that sense, client and architect inspired each other. In terms of the career arc, I think it established NMDA very quickly as a firm that has its own ideas and knows how to build them well. That’s the hallmark of what we do: We make experiments that last.

ID: Your buildings have been described as “graphic,” “contoured” and “aerodynamic.” What term or phrase do you think best describes your work?

ND: Formagraphic is a term I invented that attempts to place in close proximity to one another the depth and fullness of form and the immediacy and vividness of the graphic. Our work is a unique merger between 2D and 3D, so really the term tries to capture the essence of that world.

ID: What inspired the unconventional “swelling” and “leaning” lines of HL23, the luxury apartment building in New York’s High Line neighborhood, which was your first freestanding building commission?

ND: Two things really. First, our client asked us to design a building that would by necessity break, and fairly dramatically I might add, the zoning envelope of the site. To gain what amounted to be 40 percent more floor plate, we knew that the building would have to push out towards the park. Second, given this “dare” from the client, our skill in fluid surface geometry allowed us to produce a subtlety to the cantilevered form. As a luxury building, the form needed to be elegant. As a building that directly engages visitors on the High Line, it had to be formally aggressive, iconic even. So it’s a building that stands out and fits in at the same time.

ID: How are projects like the High Line changing the game in urban architecture?

ND: As much as there is disdain in many quarters for the spectacle or icon building, the fact is they are still a part of the complex make up of cities. In the case of the High Line, the spectacle is that it was rescued and converted into a completely unique experience. Experience is the currency of the High Line and of course it literally became a catalyst for development, which by the way, has been more than $3 billion since 2005 in West Chelsea alone. I don’t know if that sort of cultural and financial success will be so easy to repeat, but it certainly has brought urban and architectural design back to the forefront in cities across America.

ID: Your models and drawings are part of several major museum collections (including MoMA and the San Francisco Museum of Contemporary Art). What do you hope the average museum visitor can learn about scale, context, structure and design from looking at your work?

ND: If the status of importance is what the museum context confers upon the objects it collects, then architectural work in museums helps people understand the role of design across all scales, whether at the scale of the city or a chair. The museum becomes a lens in a way to look at everyday life. If you see the model of the Guggenheim New York in MoMA, then the real building takes on a new level of not only significance, but also the public can “study” it in a new way. In the case of my work, the public can see unbuilt, very speculative projects I did 20 or 25 years ago and measure it against the built work of today. There are too few museums, particularly in the U.S., that do not place design and architecture on par with art. They are very different mediums, but they all shape our environment equally.

ID: What challenges your creativity more, commercial or residential projects?

ND: I have no preference for the type of commission we receive. We have a very broad range of project types, locations and scales. I’d say the variety is very instrumental to the work as there is much to learn and transfer from each commission. The vision of the clients and the users are really the most important element. As long as they understand what the value of our work is to them, then we know the work will reach a higher level than ever before. That’s what makes the next project always the most exciting one.

ID: What are the major differences between designing for L.A. and New York? And is there a city you’d love to leave your stamp on with a major freestanding commission?

ND: L.A. and New York are radically different environments, of course, just the same way Paris bears no resemblance to Tokyo. Weather, culture, politics, transportation, etc. – these are the conditions that change from place to place and it is the opportunity, given a global society, to build in cities other than your own one that inspires new ideas for us. I am quite lucky to have executed a major building in New York, but it was a challenging process. There many cities that are part of my background, like Paris, London, Tokyo and Houston, which would have special meaning for me to build there. Then there are cities that I find really unique and appealing like Ljubljana, Kyoto, Seattle, and Frankfurt for instance. But I hope I’ll have a chance to produce something of significance for L.A., my home city.

ID: What are the most exciting projects on your plate for 2013?

ND: In September, we won an international competition for a port terminal and harbor authority in Keelung, Taiwan. It’s nearly 1,000,000 square feet and it starts construction in a year, so we will be very busy developing it over 2013.

<Back to main article

Where Are They Now: Andrée Putman

Where Are They Now: Eva Jiricna

Where Are They Now: Bruce Bierman