Why Design Is The Most Underutilized Business Tool 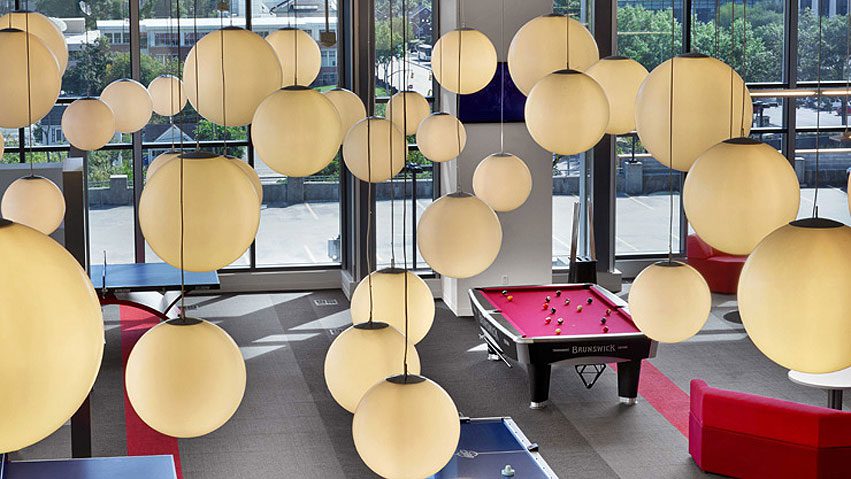 
“The smartest players in corporate America are parlaying their work spaces into a competitive advantage. Here’s How.” So begins a special report by

, a new collaborative tapped by the

to deliver a series of studies on why design may be the single most underutilized business tool. Packaged as case studies, the first report was released this year during

reporter Kevin Salwen, one third of Design Leveraged alongside fellow


The study begins by establishing why design is so critical, not just for the likes of Google and Facebook, but for all smart businesses with eyes on their bottom lines. “Real estate costs are rising roughly 10 percent a year, a scorching war for talent is underway (and expected to worsen) and the demand for innovation amid global competition is acute,” the report states. Salwen argues that the solution for these struggles lies in the workplace, where there too often exists a strong disconnect between between the aesthetics of designers and how smart businesses operate. And that’s extra problematic when you consider the report’s mandate that designers and clients be close partners.


To bridge the divide between design and business, Salwen says he aimed for “…immersion and a deep understanding of the culture of the company. You have to understand it in a way that is a little backdoor,” he says. The results include the success stories of Pirch, 3M, Zappos, ThoughtForm, Coca-Cola, Red Hat, and Quicken Loans—largely approached from the client’s perspective, which revealed three “universal truths”:


Surprising examples of these tenets include “Monkey Row” at Zappos, where the CEO occupies a 6-by-8-foot desk in the middle of a row, and the floor plan allows for three private offices only. At Pirch, corporate headquarters adopted a welcoming expresso bar from a nearly identical version found in its shops—an attraction that spoke to the company’s culture and pleased shoppers, clients, and employees alike.


After six months spent researching, Salwen says he was surprised to find how open most businesses were in talking about their own challenges and the inner workings of their offices. “When people talk about how design fails, it’s not personal. It’s a structural failing,” he says. He was also surprised that shrinking spaces can still make employees happy. He says, “It’s like a Rosetta Stone: how do you put together design and business?”


Perhaps the report’s biggest takeaway is the need for a closer relationship between businesses and designers: “Design can’t move forward unless it has a business rational,” Salwen says with gusto. “But manufacturers and designers

be successful if they focus on what the people in the corporate tower really need.”


Salwen credits his team’s outside perspective (despite the project’s focus on office design, this year was his very first time at

) with the report’s candid take on why office design is so rarely successful. Design Leveraged is already working on its next report, slated for NeoCon 2015.