Why Korean Photographer Ahae Gets Special Treatment at the Louvre

Hidden behind the chestnut trees on Carre du Sanglier in Paris, “De Ma Fenêtre,” the exhibition of Korean photographer Ahae’s work on view in the Jardin des Tuileries marks the first time that the venerable Musée du Louvre has hosted a private exhibition in its own backyard. Over 60,000 visitors since late June have made the show a popular success, in no small part owing to the pavilion designed for the site by British designer Charles Matz and architect Guy Oliver. The 12,000-square-foot pavilion, constructed over the course of nine days, aims to, “Create an oasis where viewers can contemplate the message of the art,” says Matz. To that end visitors cross over a wooden bridge built by Norman Guiver and enter a darkened hall leading toward an illuminated photograph – the same size as the window where Ahae takes all his photographs. Turn the corner and you’re in a bright oval room dedicated to images of water. Very serene and beautiful – and interesting to note that both oval rooms (the second is dedicated to aerial images) are in fact suspended from the ceiling 30 feet above. 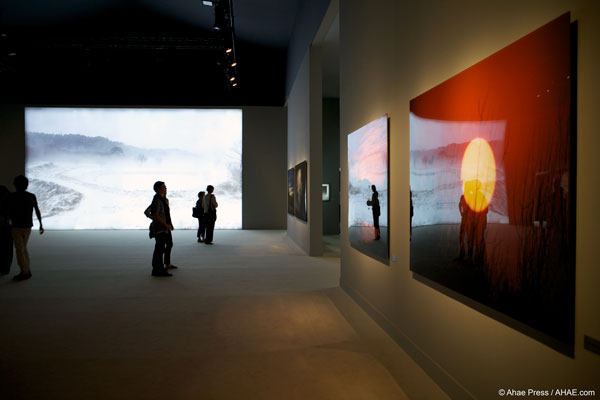 The center room in the pavilion is dominated by two massive LED-illuminated photographs. Photo courtesy of Ahae Press.


“I had to give a French audience a context for the photos and Monet’s Waterlillies naturally came to mind,” Oliver commented, referring to the fact that the French painter’s work was originally shown in the Orangerie in oval-shaped rooms. The ovals also recall the pools in the Tuileries and the small pond that figures in so many of Ahae’s photographs. The center room is a cool and sombre box almost 33 feet tall, its shadowy space dominated by two massive LED-illuminated photographs, the largest ever exhibited in a fine art context. It gave us the feeling we ought to take off our shoes and assume a kneeling position. “I wanted it to feel as if Korea had somehow dropped into the Jardin des Tuileries,” says Matz. Ahae’s exhibition in the Tuilleries has been extended to August 26th. Negotiations are currently underway for the show to travel to a number of other European cities this year and next.