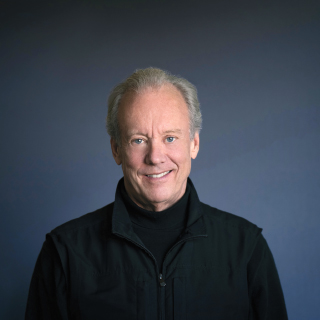 Poetic visionary and tireless evangelist for the closed-loop industrial cycle known as Cradle to Cradle, William McDonough is the prototypical TED Talks rock star of sustainable design. Approximately 8,000 products bear the C2C imprimatur, a certification created by McDonough Braungart Design Chemistry. The former dean of the architecture school at the University of Virginia in Charlottesville, he now serves as a visiting executive lecturer, while William McDonough + Partners operates nearby, working on such projects as environmentally forward manufacturing plants for Herman Miller and the Ford Motor Company.

McDonough grew up in Tokyo after World War II, so the globetrotting lifestyle comes second-nature to him. He’s as agile at strategizing ways to reuse consumer and industrial waste as he is when discussing ancient philosophy. After his latest trip to the annual World Economic Forum in Davos, Switzerland—where he designed the ICEhouse, short for Innovation for the Circular Economy—he paused to remind us how designers can save the planet.

Interior Design: The ICEhouse has become the cool hangout for the Davos cognoscenti.

William McDonough: It’s been a quiet place to meet outside the conference center, without badges—a small pavilion full of emptiness. Someone who didn’t know my personal background said it must have been designed by someone who was born in a Japanese paper house. And that is true.

The walls are only 1 inch thick, but they are fitted with Aerogel translucent R-15 nanotechnology insulation. Really space-age. You think you’re going to freeze, and actually you’re warm. The light is perfect, too. It’s slightly magical—and also a way for people to physically be inside the circular economy.

ID: What is the circular economy?

WM: Instead of simply taking, making, and discarding, we can remake things— and start designing for that. The ICEhouse is constructed from a few simple materials, with nylon carpet from my C2C collection for Shaw Industries. Everything can be reused or recycled, ad infinitum.

ID: How have people reacted to the ICEhouse?

WM: Two CEOs told me that the best meeting of their life occurred there. When they had an idea, it became light, beauty, perfection.

ID: What sort of ideas?

WM: SABIC announced a plan to take back plastic trash from “bottom of barrel,” all the stuff you can’t normally recycle. It’s going to upcycle it using pyrolysis, or non-oxygen combustion, at a specially designed plant. Essentially, the process leaves behind a sludge that contains all the inks, glues, and other contaminants that can’t be recycled while pulling out the hydrocarbon. We get back the oil that makes recyclable plastics and stop putting fugitive carbon into the world.

WM: Carbon is innocent. Carbon is a tool in the hands of humans. The user gives it a value, positive or negative. Fugitive carbon is released into the atmosphere by burning fossil fuels, deforestation, food scraps in landfills, and so on. Carbon can be toxic. But there’s “living” carbon, which is organic, flowing in biological cycles, providing fresh food, healthy forests, and fertile soil. That’s also different from “durable” carbon, which is locked in stable solids such as coal and limestone or recyclable polymers that can be reused.

It’s important, at this moment of the fourth industrial revolution, to learn a new language. Being less bad is not being good. We have to be more good. That’s what we have to tell children.

ID: How many kids do you have?

WM: Two. And I consider myself an honorary child. The world needs adults operating under child supervision. Children think Cradle to Cradle is obvious.

ID: What’s on the C2C horizon?

WM: International Flavors & Fragrances has launched a C2C scent—and such companies don’t typically give out a formulation to review against C2C standards. Also, new C2C plastics are coming out. We even have C2C-certified T-shirts. Every single molecule of those shirts has been designed for human health, made by people who are properly rewarded, using 100 percent renewable energy and water that is so clean that they reuse it. So we can do this. We can live like this.

ID: Do you have time for architecture these days?

WM: We always like to have a house in progress—we’re finishing an exquisite one in Santa Cruz, California. In Luxembourg, we’ve been commissioned to design a hotel based on principles of the circular economy. With various clients around the world, we’re working on solar arrays that also help grow food. Our solutions don’t do only one thing at a time. We can do solar plus food plus water. Plus, plus, plus.

ID: What was your first product conceived as Cradle to Cradle?

WM: It was Eco Intelligent polyester for Victor Innovatex, almost 20 years ago, when I was first thinking about indoor air quality. We surround ourselves with things that we breathe, see, and touch. Why shouldn’t they be healthy and beautiful? When you’re working with a matter of principle like this, you just keep going. Sure, it’s tough, but it’s great work, so get on with it.

> See more from the February 2018 issue of Interior Design