Wilson Associates a Finalist in Competition to Redesign QE2

A rendering of the proposed QE2 yacht club upper deck by Wilson Associates.

is in the running to redesign the iconic ocean liner MV Queen Elizabeth 2 (QE2). Earlier this year, QE2 Holdings appointed COSCO Shipyard Group to refurbish what was once the most famous ocean liner in the world into a luxury five-star heritage hotel. They later announced the seven candidates, all international interior architecture firms, who would compete for the project’s design. Among the finalists are three US based firms, including Wilson Associates,

A rendering of a one bedroom residence from the Wilson Associates QE2 design proposal.


Dylan Wills, design director at Wilson Associates in Singapore, says, “The QE2 is a vessel with an illustrious history and an unparalleled prestige. We would like to honor her legacy by using the QE2’s structure as a living shrine to the golden age of cruise liners, where luxury and elegance were abundant.”

The design incorporates features evoking the ship’s worldwide travel and hints at the Asian Pacific where the future hotel is expected to make it’s new home, and Great Britain, where the ship was built and originally set sea in 1967. The dining areas are lavish and ornate, featuring traditional furnishings which represent the new hotel’s historic heritage. The suites and residences boast cleaner, more modern designs, while the yacht club incorporates bold architectural features.  “We would like to preserve the QE2‘s distinguished past and present an interior that truly befits her royal status,” says Wills. “Our approach would show people the past, present, and future of luxury cruise liners in an interactive experience, unparalleled anywhere in the world.”

The QE2 has carried over 2.5 million passengers in her forty years of service from 1967 to 2008. She has hosted celebrities, royalty, presidents and prime ministers, has crossed the Atlantic 800 times, and has circumnavigated the globe 25 times.

A rendering of the Queen’s Grill restaurant and dining room from the Wilson Associates QE2 design proposal.

All seven proposals are available to view at

. An advisory panel featuring legendary architects and designers will assist QE2 in their selection of the winning candidate. Public comments will be taken into account along with a set of selection criteria. The winner will be announced on November 30, 2013. 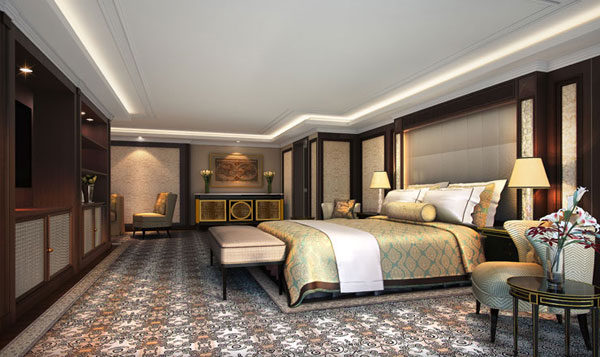 A rendering of the Britannic Suite from the Wilson Associates QE2 design proposal.