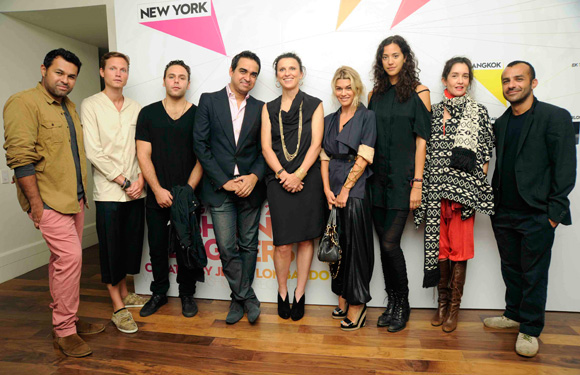 Apparently, we are only the latest in what we assume is a long line of New York blog posters to catch a glance of distinctive jewelry designer

in random locales from the corner of Downing and Bedford Streets to strolling on the High Line hand-in-hand with a sweet young thing. So we weren’t particularly surprised to see him supporting W Hotels Worldwide’s Fashion Next program, the design-savvy hotel chain’s platform in the garment sphere of the industry.

Jenne Lombardo, the company’s global fashion director, Eva Ziegler, its global brand leader, and Stephanie Winston Wolkoff, Lincoln Center’s fashion director, hosted a breakfast at the W New York on September 7, announcing Fashion Next’s current crop of six designers, all of whom are presenting collections at Lincoln Center’s The Box during New York Fashion Week. Also announced was the company’s plan to extend the program internationally at fashion week events in London, Moscow, and Bangkok. In addition to this week’s shows, the selected designers—Michael Angel, Leana Zuniga of Electric Feathers, Bibhu Monhapatra, Yara Flinn of Nomia, Juan Carlos Obando, and Laurence Chandler, Joshua Cooper, and Michael Venker of Rochambeau—will have the opportunity to work with the company on both fashion and design projects throughout the year. Tonight, Fashion Next sponsors a performance by Katy B at The Box from 8 to 10 p.m. We wonder where Waris stands on British singer-songwriters.