Like a fresh-from-the-box sneaker, all-white design gives a clean look to interiors. Curves, angles, and patterns stand out when color takes the backseat. 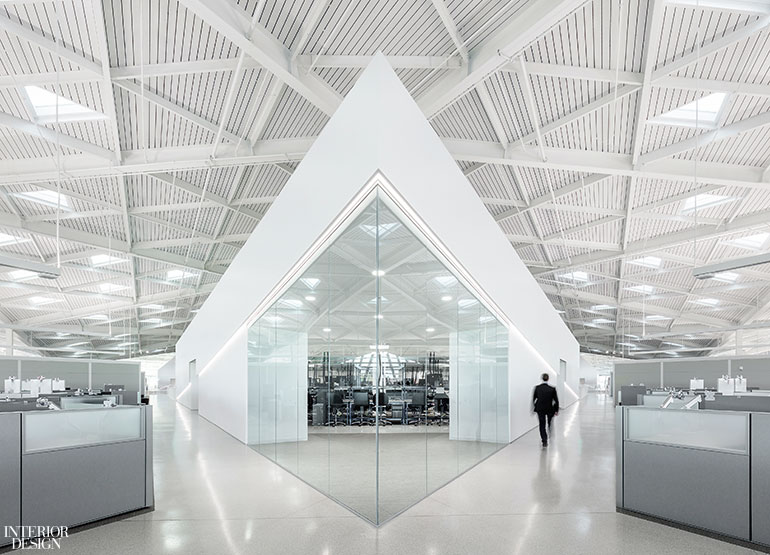 A terse challenge was posed by Nvidia co-founder and CEO Jen-Hsun Huang: Create a headquarters that enables the company’s 2,500 employees to interact with one another. Gensler design director Philippe Paré and managing director Hao Ko responded by conceiving the 500,000-square-foot, Santa Clara, California, building as a campus, rather than a campus of buildings, which was the usual program for the tech company’s counterparts. And they did it with the triangle. Read more 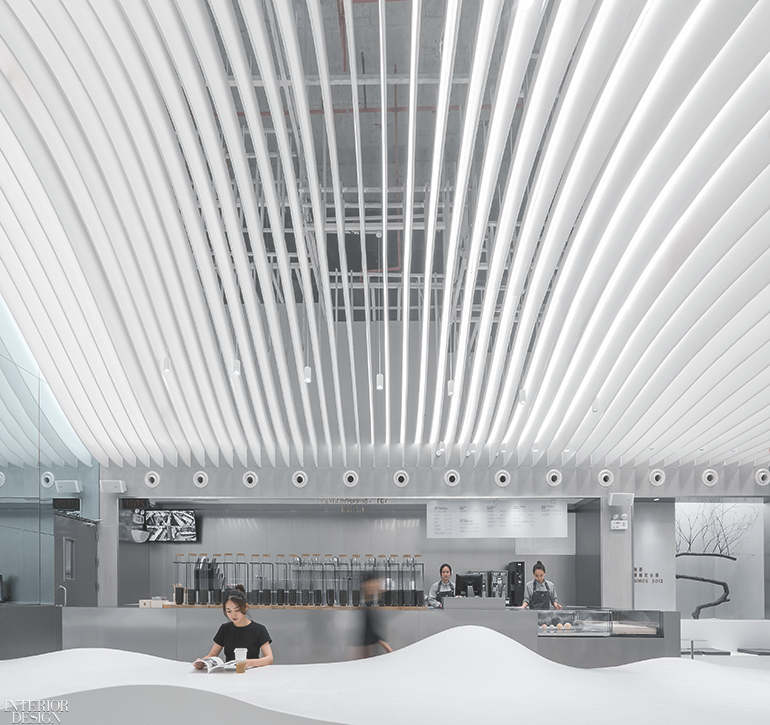 Simplicity and ingenuity are the key ingredients to this tranquil tea shop in the heart of the bustling Chinese city of Guangzhou. Aan Architects’ principal designer Yan Junjie says he sought to generate a feeling of “cool and Zen that honors the heritage of traditional Chinese tea culture” by creating a sleek and bright environment, but one that encourages customer interaction with the surroundings—and each other. Read more 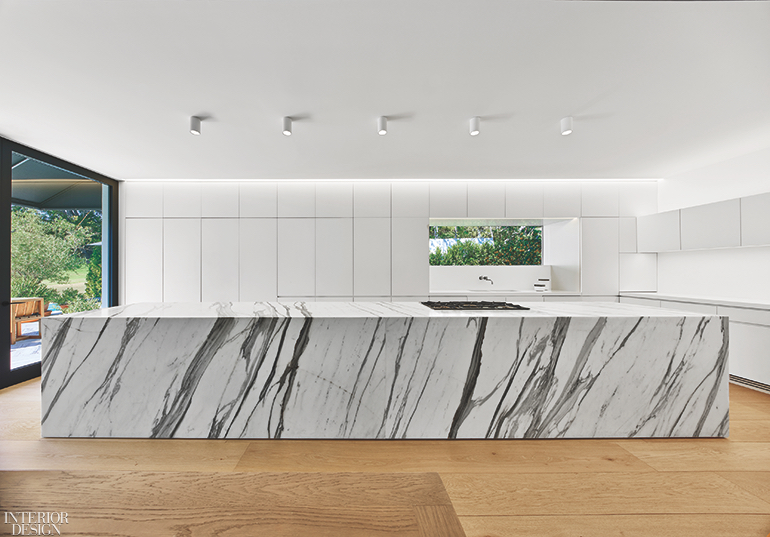 Designed in the 1920s by noted architect Roland Coate, this tony Bel-Air residence had seen better days. Standard Architecture‘s founding principal Jeffrey Allsbrook and partner Silvia Kuhle stripped away excess inside and out to create a minimalist, abstracted take on neoclassical design. Anchoring one end of the house is the airy kitchen, with white-lacquered cabinetry and a massive Italian marble island that stretches nearly 18 feet long. Allsbrook confides that both pieces took some convincing, but the clients ended up thrilled. Read more 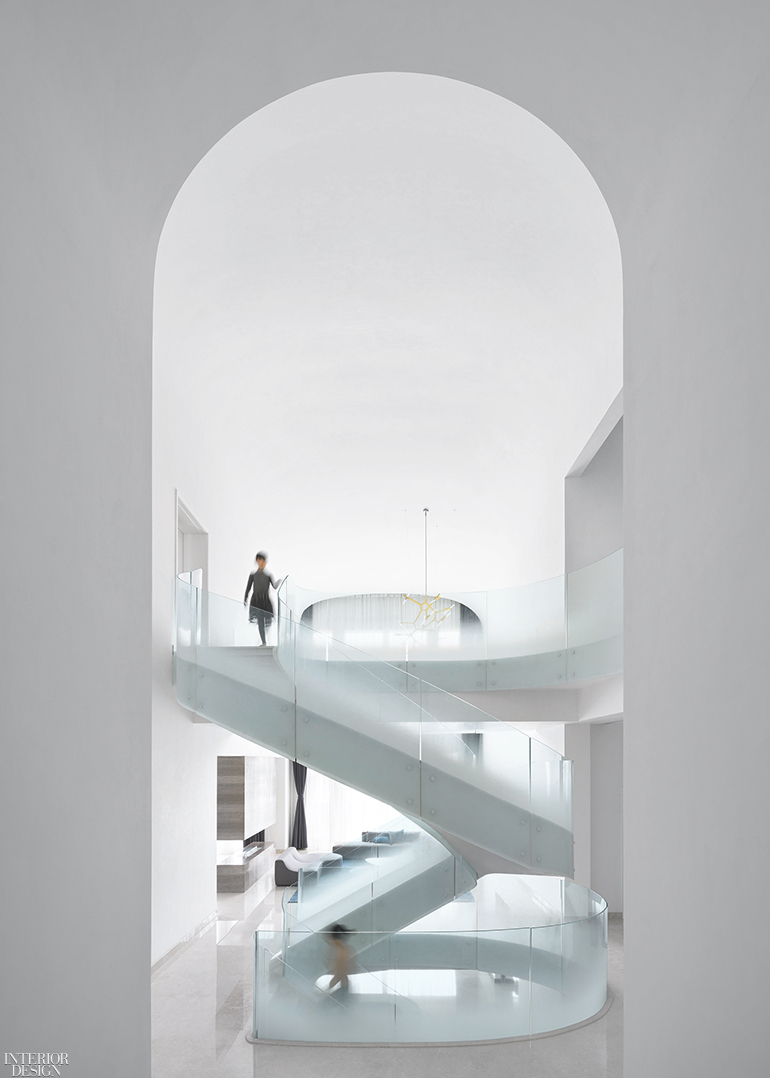 Just when you thought there couldn’t possibly be another way to reinvent the developer spec house, along come architects Andrei Zerebecky and Lukasz Kos, of Atelier Zerebecky and Kos Architects respectively. The remaking of a dark and disjointed residence, in the smaller neighboring city of Kunshan, was one of their last collaborations. The two created a vaulted ceiling under the house’s pitched roof and carved out the space beneath it, yielding a cathedral-like scale to the single-family home. Read more 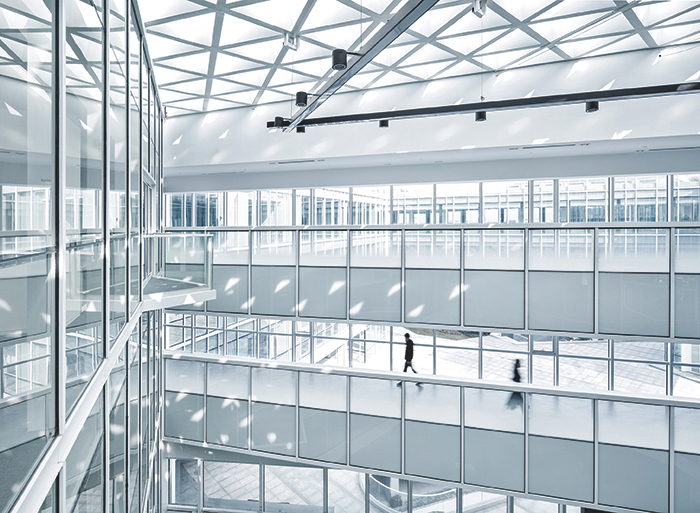 The ground-up headquarters of Baoye Group would also be key to a new business district that MVRDV had master-planned near Shanghai Hongqiao International Airport. LYCS Architecture founder and chairman Ruan Hao considered the architecture of the three-building complex as the jumping-off point. His vision of unifying exterior and interior begins with the sunny atrium lobby, topped by a trapezoidal skylight and wrapped in glass. Read more 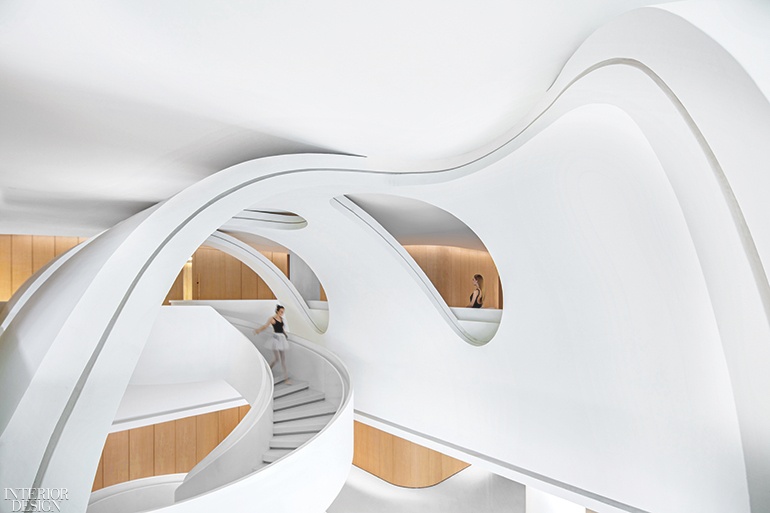 Pone Architecture design director Ming Leung was playing with her 4-year-old daughter at home when she got the idea for this art center’s design. Immediately upon entering fluid open spaces are anchored by the sweeping curves of a staircase with illuminated steps that spiral upward, while an overarching canopy swoops down. In sight of the entry, room enclosures curve enticingly, leading the eye around corners. These enclosures are clad with vertical panels of blond wood-grain composite, the only color against an ethereal white backdrop. Read more 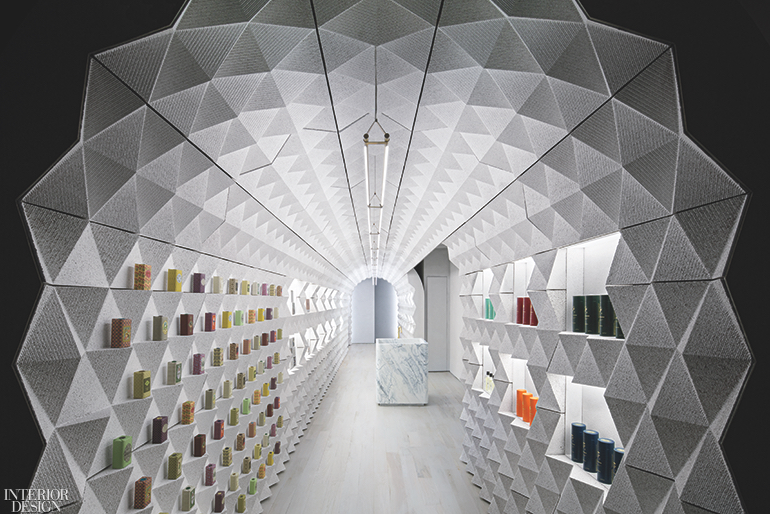 For the New York store for Claus Porto, the Portuguese soap and fragrance company, Tacklebox Architecture fashioned a cork display archway that’s 42 feet long. Its diamond patterning mimics the tiled facade of the historic Casa dos Bicos. At the center of the shop, a monolithic wash­basin that nods to the ritual of daily cleansing is carved from, of course, Portuguese marble. Read more 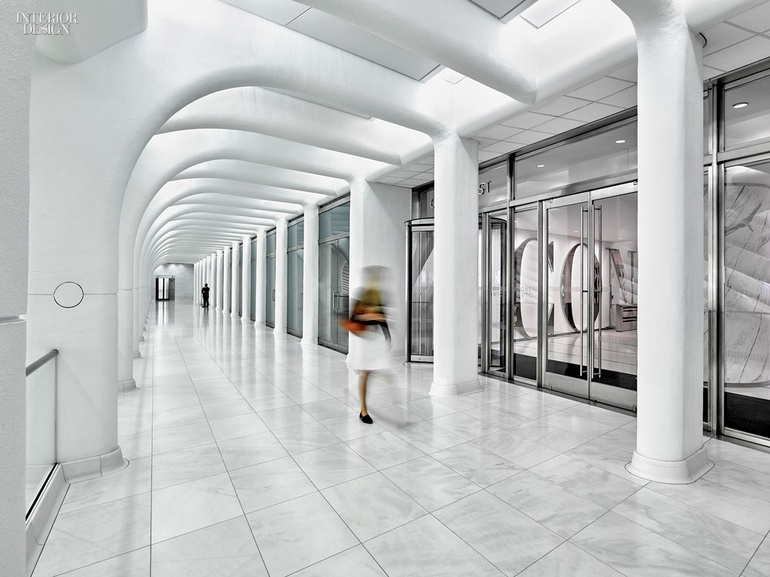 This project’s vast scope proved a perfect demonstration of the firm’s dexterity at grappling with a complex program: an estimated 1.3 million square feet spread over floors 20 through 44, encompassing 16 print titles and 20 websites with hugely varied desires and requirements—not to mention intense security mandates. The company logo is visible from the building’s public spaces, including the World Trade Center Transportation Hub by Santiago Calatrava. Read more 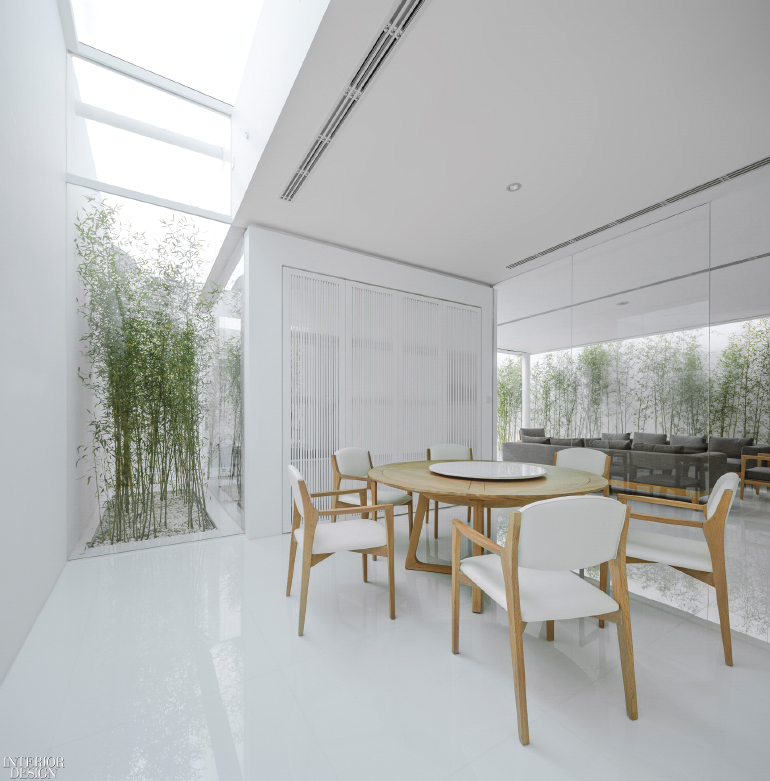 No one would ever guess that this oasis exists on the roof of Beijing’s enormous Golden Resources Mall—at 6 million square feet, it’s nearly twice the size of the Mall of America. But the indoor-outdoor aerie by V Studio founder Hu Quanchun takes up just 3,500 square feet. Read more 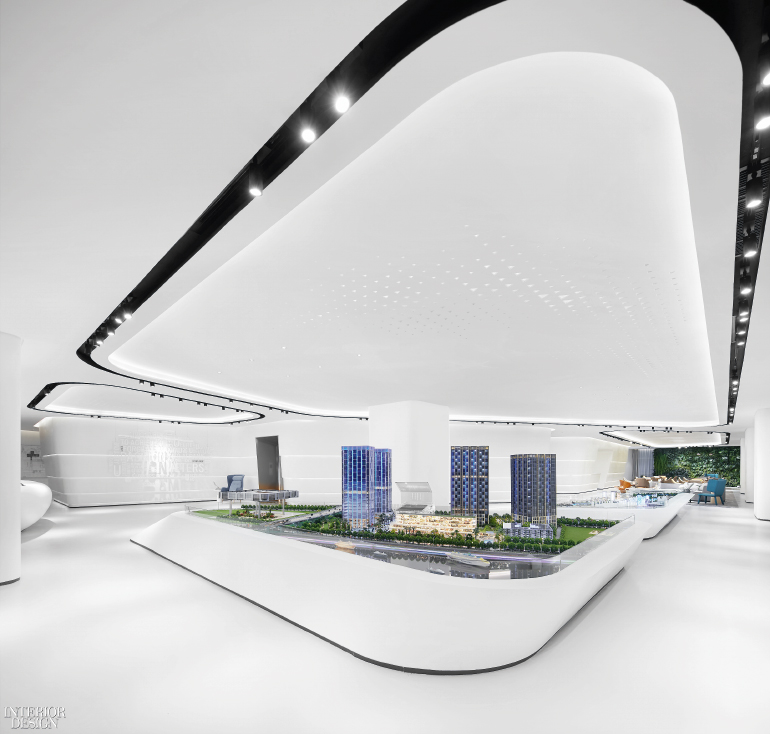 This space displaying and selling residential models and units for a complex of buildings in Fujian Province is expansive. It’s also super chic. Credit for the latter goes to the luxe materials chosen by C&C Design Co. co-partner and design director Peng Zheng and his team: marble, steel, mirror glass, glass fiber–reinforced gypsum, and polyurethane paint, all, except for a corridor’s bronzed aluminum composite board panels, in either black or white. Read more

Durability is a paramount concern when it comes to thermoses. This is one reason why Daosheng Design founder He Yongming looked to the striated walls of a canyon as inspiration for his showroom for the popular Chinese thermos maker. After all, canyons are about as durable as it gets, withstanding rain, wind, and the test of time. Read more

12. Architect Mathias Klotz Creates a Pair of Cottages on a Remote Island in Chile 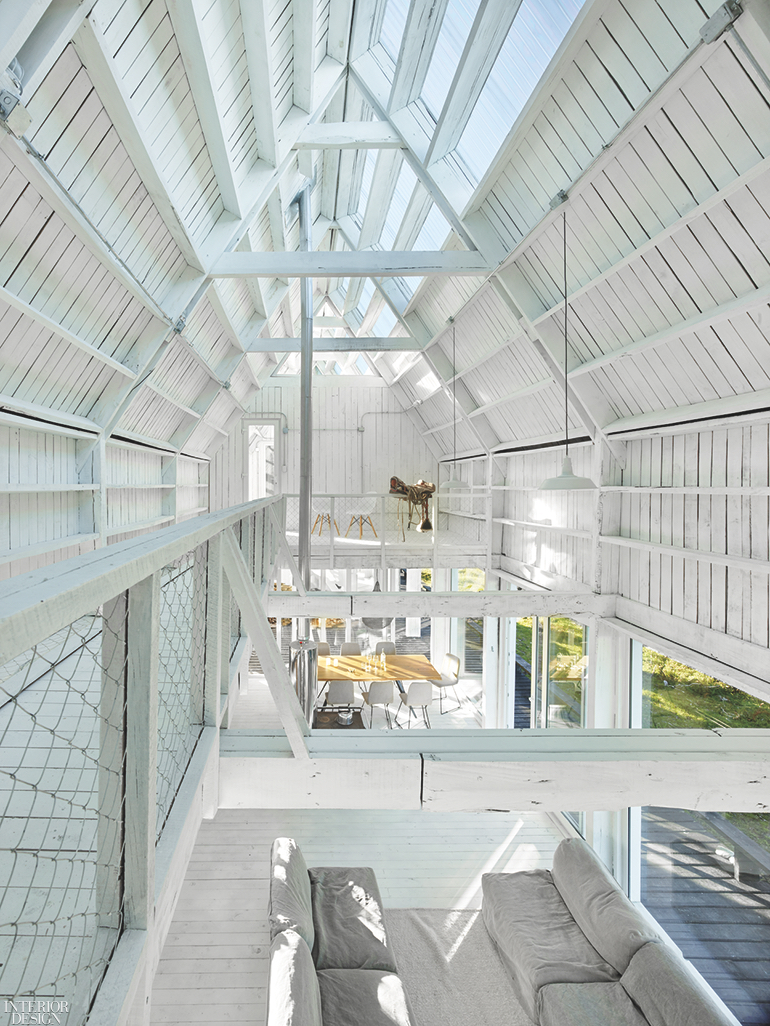 Architect Mathias Klotz, principal of his eponymous firm, has designed many retreat houses, characteristically with a clean-lined modernism that nods to one of his heroes, Ludwig Mies van der Rohe. For his own family’s retreat on a largely undeveloped coastal island, he used archetypal forms that evoke both past and present. The timber framing, made of canelo, an indigenous wood, is left exposed throughout and whitewashed, while the continuous skylight floods the living area with natural illumination. Read more 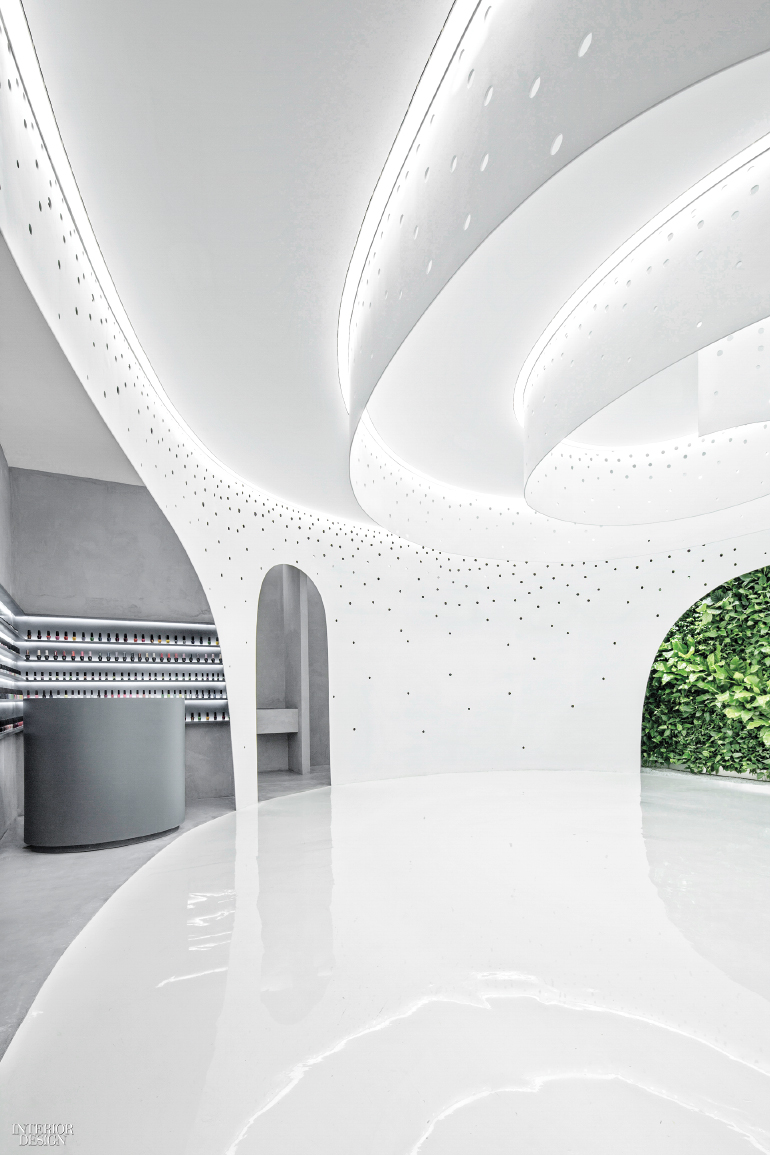 The firm was tapped to create an outpost of the Lily Nails chain in Youtang Shenghuo Square that would chart a new look for the brand. Archstudio inserted a spiraling steel plate within a 700-square-foot rectangle to create a space that emulates a fingerprint’s loops and whorls. A service room and a staff room are concealed in the rear corners of the salon, while the other side wall is planted with living greenery. Read more

14. Nathanael Dorent and Lily Jencks Conceive Stone-Clad House Near the Estate of Her Father, Charles 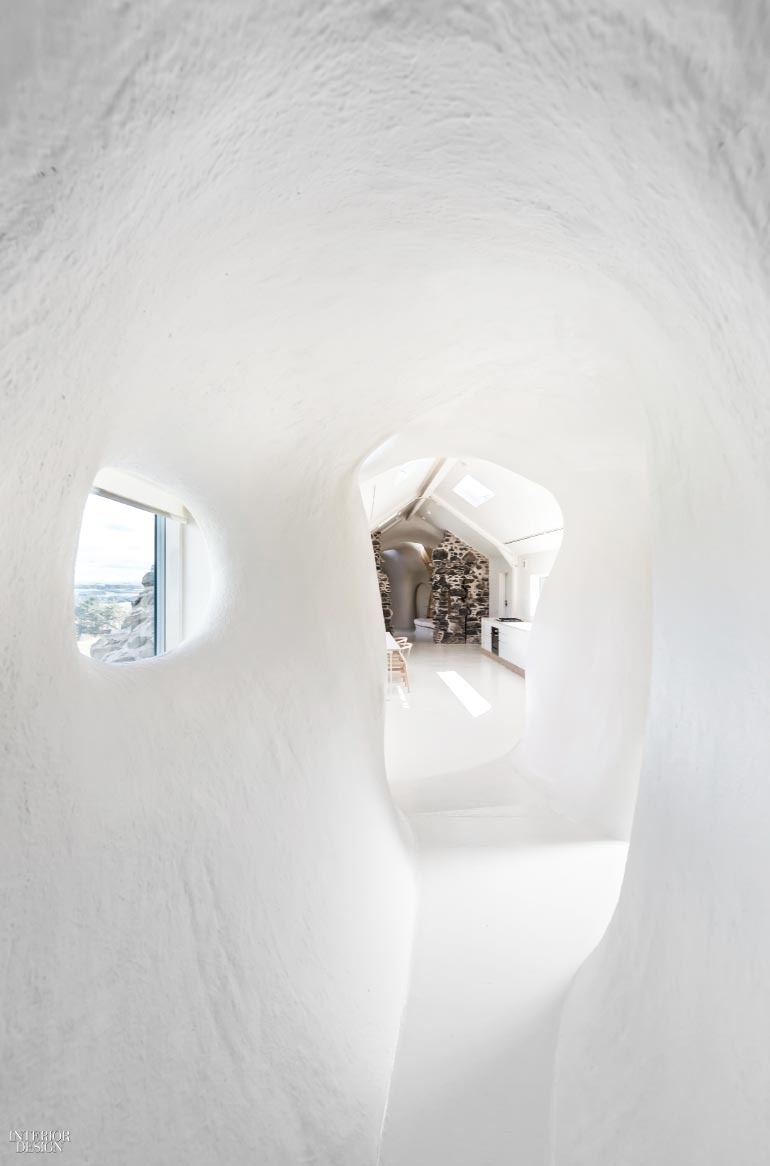 Constructed inside the ruined granite walls of a cottage more than 200 years old, this house by Nathanael Dorent Architecture and Lily Jencks Studio conforms to its predecessor’s skinny dimensions. The interior is an explosion of invention, energy, and light. A curvaceous white shell defines the 1,900-square-foot floor plan. Read more 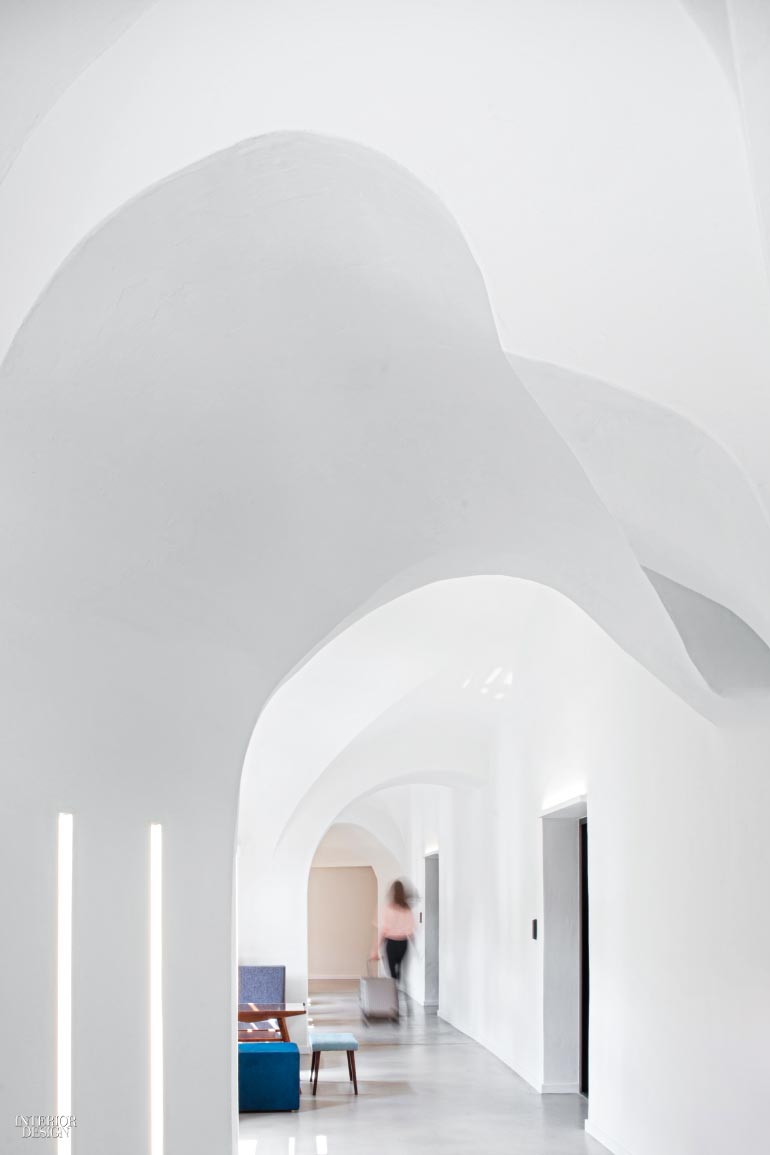 A background in film production and exhibition design made the move to interior designer a logical one for Denisa Strmiskovà. A natural curiosity about materials, details, and narrative has allowed her to move seamlessly between worlds, employing an approach that is less formal and more intuitive, even emotional. In the building she transformed into a hostel, sophisticated lighting, endless white plaster, and strategic pastels were derived from her scenographic past. Read more

16. Alessandro Isola Delivers a Cool Touch to a Miami Pied-à-Terre 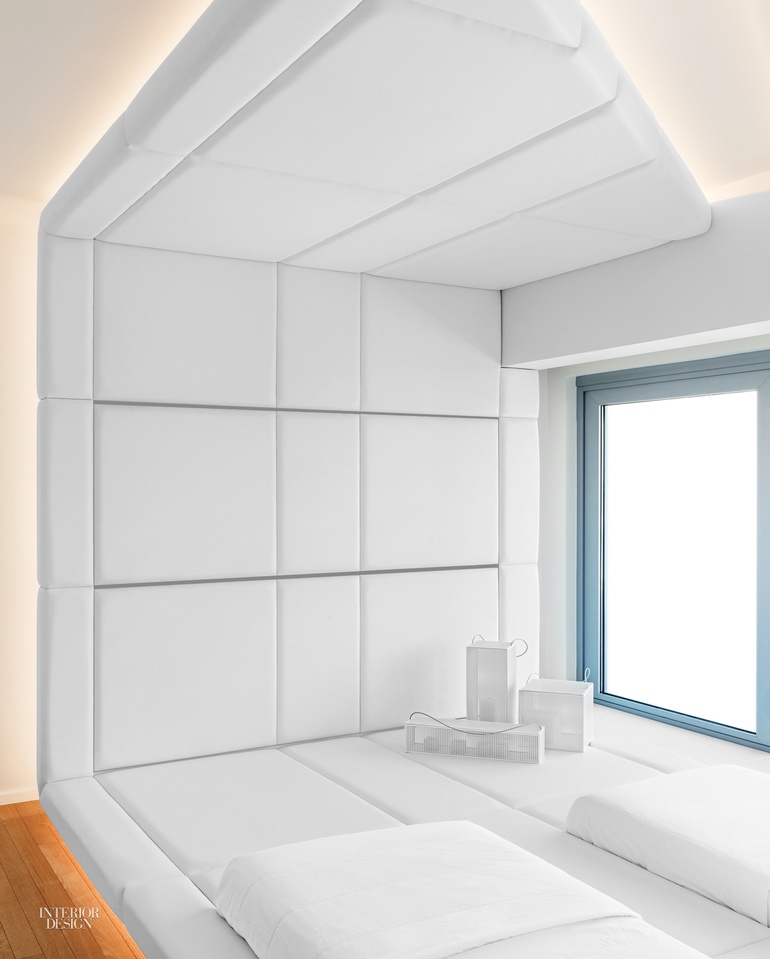 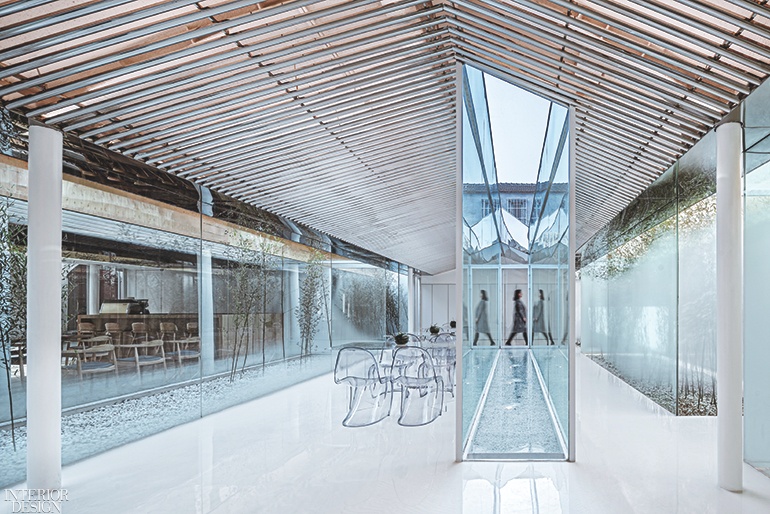 When creating a boutique hotel near Beijing’s Qianmen Gate, Archstudio took cues not from passing fancies but from a fixture of historic neighborhoods: the traditional siheyuan compounds that once formed urban buildings blocks but are now more often casualties of redevelopment. The local firm reinvented a 5,700-square-foot quad­rangle into Layering Courtyard, a mixed-use bed-and-breakfast and events space—and a self-contained oasis in the bustling city. Read more 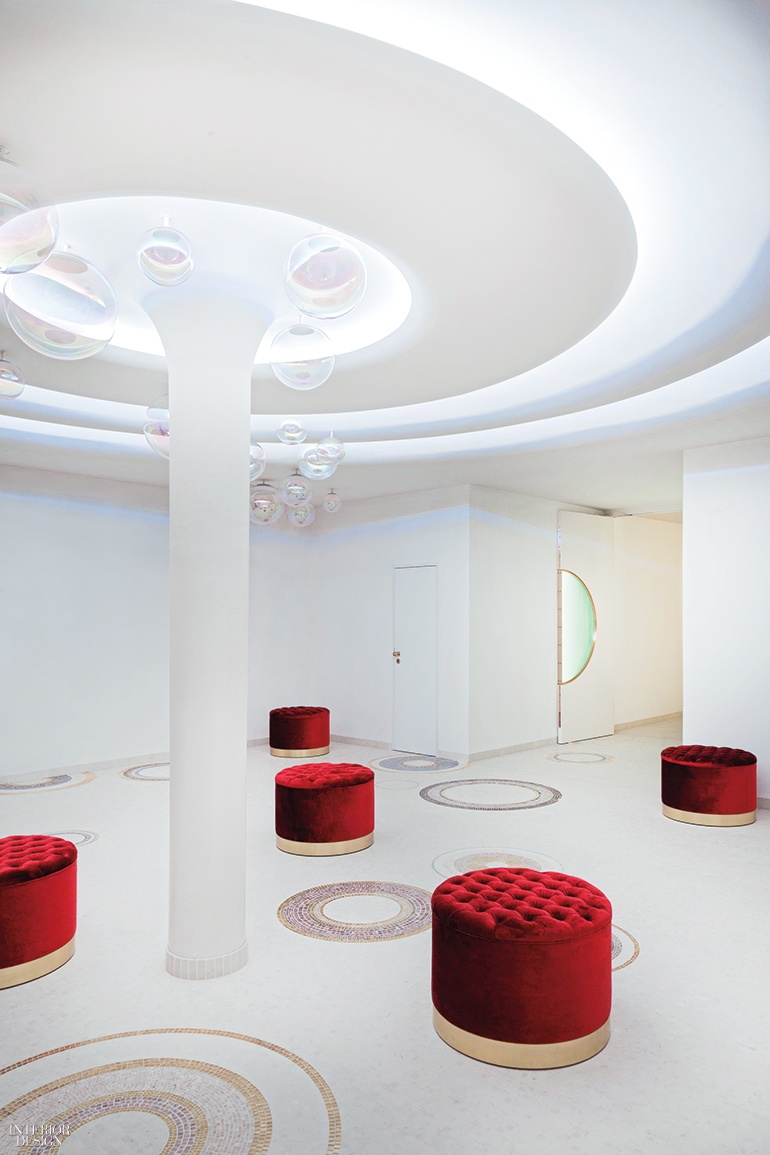 Bennett & Böhme expanded from fashion to interiors with a reinvention of the theater’s basement, home to this dramatic, mostly white restroom lounge. Plush red button-tufted velvet-covered ottomans are scattered about the mosaic tile flooring, flashing hints of gold. Overhead, clear glass spheres are suspended from a ceiling sculpted into concentric rings around a central column. Read more 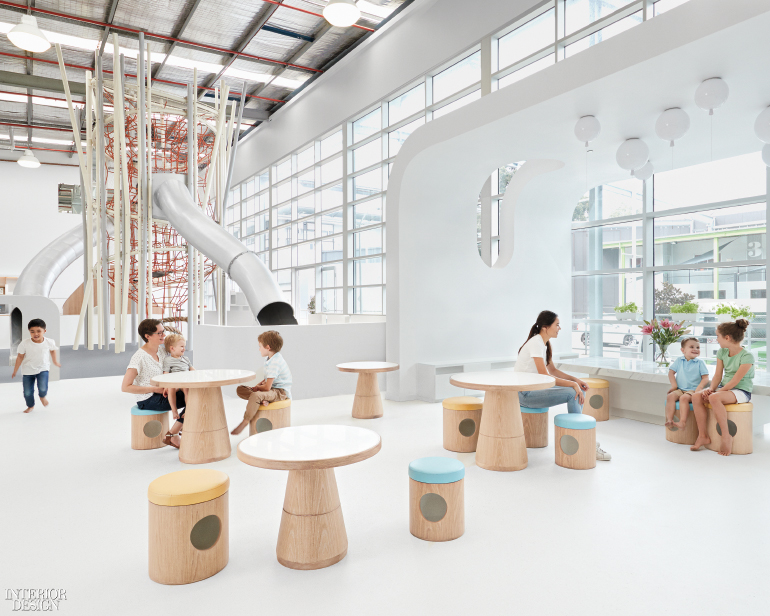 PAL Design Group design partner Joey Ho’s cliché-busting design abandons gaudy colors and plastic toys, things he calls “the result of adults superimposing their own perspective.” Instead, he favored lots of white, accented with pastels and oak veneer. Arched doors, in child and adult sizes, are clear glass, allowing parents to peer in at what their offspring are up to. Read more 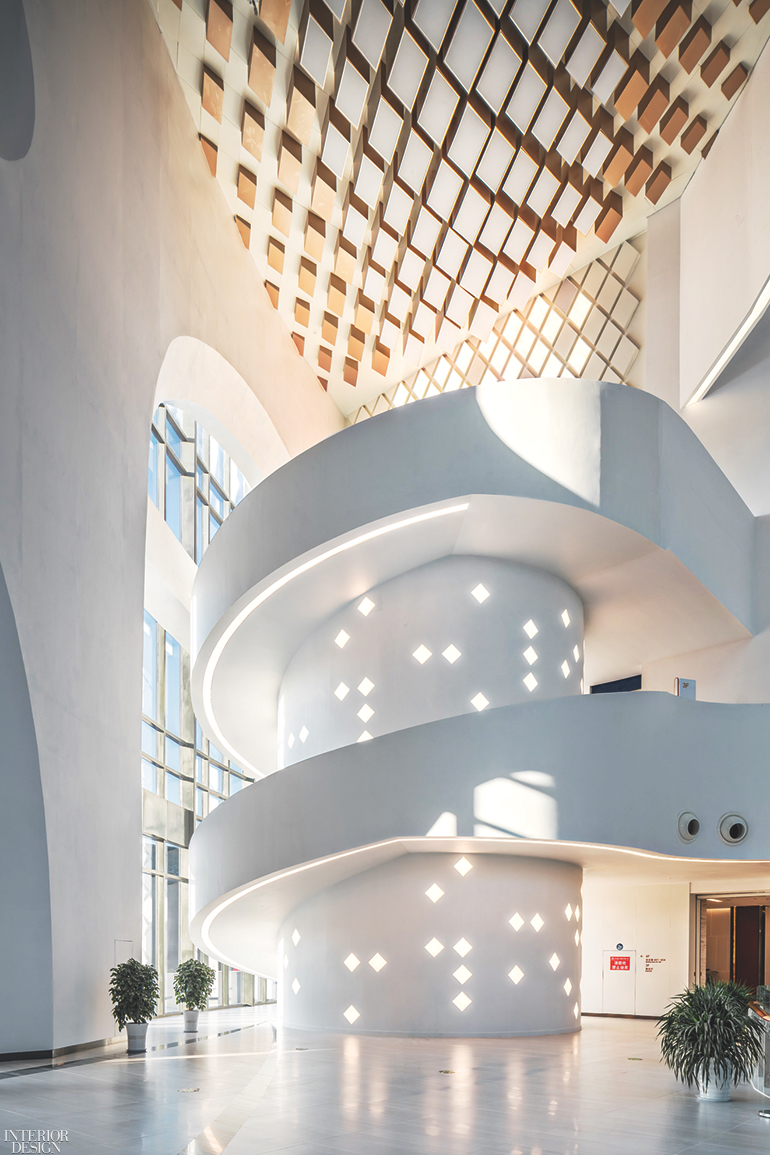 This civic center, funded by the state-owned railroad and designed by Tengyuan Design, is literally big enough to drive a train through. In the center’s ceramic-tiled lobby, fiberglass-reinforced gypsum board is CNC-cut into an abstract school of fish surrounding a column and then swirls upward, in solid form, to the ceiling, and outward, to wrap the staircase enclosure. Read more