Never flashy, Fred Fisher’s projects are sensible, sensitive, and always on point. Take his recent effort at the California Institute of Technology in Pasadena. The Walter and Leonore Annenberg Center for Information Science and Technology is all of the above. And the fact that the building looks as contemporary as it does represents no small triumph, given the rest of the campus. With a few exceptions, most notably an astronomy-astrophysics building by Morphosis and a library by Moore Ruble Yudell Architects & Planners, Caltech’s architectural style is solidly traditional. Fisher’s description is best: “The DNA is Mediterranean, like Pasadena’s.”

But Caltech signed on to Fisher’s principles with no hesitation—having received a fixed grant from the Annenberg Foundation, for which Frederick Fisher and Partners Architects had just completed the Community Beach House in Santa Monica. Additional assurance was provided by a brainier precedent: His 2008 technology building at Princeton University had virtually the same mixed-use program. Like that predecessor, Caltech’s 47,000-square-foot version was planned to house classrooms, department offices, and the like, all under the umbrella of computational mathematics. He calls the project “the school’s state-of-the-art initiative, built fast and economically.” Equally up-to-date are the transparency, flexibility, and emphasis on collaboration. 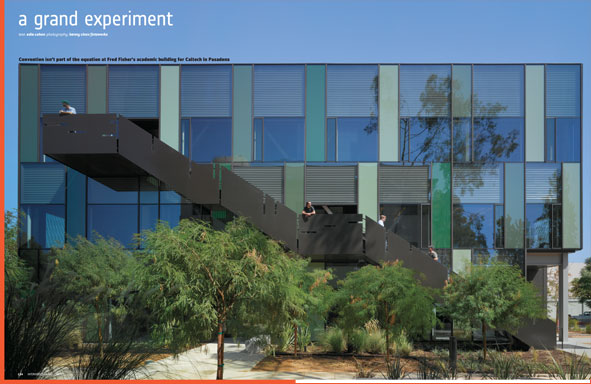 In form, the building is nothing more than a three-story glass box. “It literally reflects the campus. The trees, the sky, and neighboring buildings dissolve into it,” Fisher explains. Its curtain wall combines clear panels, some sandwiching pleated aluminum, with translucent panels back-painted shades of green inspired by the colors of olive trees. Rising diagonally across two sides of the facade, stairs of black-painted steel connect the three levels. “Putting them outside makes for more room and flexibility inside,” Fisher notes. They also make for ad hoc social spaces.

The corporate exterior gives way to a tough interior, with structure all exposed. “Some people have I beams in their offices,” Fisher continues. Furniture, on the other hand, is downright domestic. When was the last time that pieces by Isamu Noguchi, Eero Saarinen, Jean Prouvé, and Maarten Van Severen met and mingled in academia?

On the ground level, Fisher devoted a prime corner to a lecture hall, traditionally assigned below-grade status. Windows here, he notes, “show the life of the building and its connection to the outside.” Similarly see-through are the fishbowl glass enclosures emblazoned with the words conference room and instructional laboratory , aka computer lab. Coordinating with the graphics, charcoal-gray and rusty-orange carpet further delineate these two large rooms; otherwise, flooring on the ground level is sealed concrete.

The second and third stories revolve around a slightly off-center atrium. Studio spaces—combined meeting rooms and living rooms created for project teams—overlook this 22-foot-high volume through apertures in a screen of laser-cut bamboo plywood. Earthy types may see it as an indoor trellis; for arty types, it’s an installation. “A faculty member developed the random-line recursion pattern,” Fisher explains. He pulled in some eye-catching pieces for the atrium’s furniture, too. One end features the brothers Ronan and Erwan Bouroullec’s tomato-red high-backed sofa. At the other end is a blocky Hella Jongerius love seat covered in five shades of green. Between are clusters of aluminum café tables and chairs by Jorge Pensi.

While the atrium’s staircase is straight-run and industrial, a spiral stair connecting the second and third levels’ corner lounges is more domestic in mood. The topmost lounge has bamboo flooring. For the one below, Fisher chose carpet with 12 percent recycled content.

Mention sustainability, and he has plenty to talk about. Every office boasts an operable window. Those windows and the atrium’s 5-by-40-foot skylight take ample advantage of the Southern California sun. And a chilled-beam HVAC system uses less equipment and ductwork by leveraging ambient airflow. If all goes according to plan, he adds, photovoltaic panels will soon be installed on the building’s roof.