Students in the college of education at the University of Wyoming in Laramie hang out in a hip lounge, holding informal study sessions, while classmates dash by on their way to lectures. But the space now called the Sullivan Family Student Center was, until recently, an afterthought. 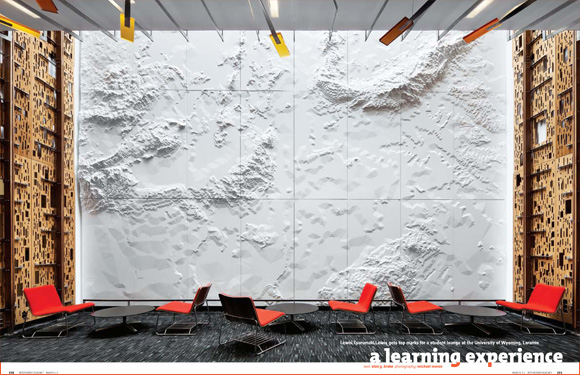 Surrounded by classrooms and flanked by staircases, the area was left largely untouched when the rest of the building was renovated. University donors, recognizing that 5,000 precious square feet were being wasted, even­tually turned to Lewis.Tsurumaki.Lewis in the quest for more purpose and personality. The firm has completed a series of highly articulated institutional and commercial interiors, and the Wyoming project is dense with material and spatial complexity but is also very rational, smartly organizing two levels of meeting and circulation areas.

In contrast to older models of thinking, which posit that educational spaces should be calm and nondescript so as not to distract students, experts now advocate for stimulating, inspiring environments rather than bland classrooms and cinder-block dorms. “There’s a reason that students study in coffeehouses,” architect Paul Lewis says. “They’re social-places to study but still be a part of a community.”

Before work began in earnest, Lewis analyzed the way the current lounge was functioning. “It was crisscrossed by circulation from all directions. There was no sense of place,” he continues. Hence the simple decision to partition off a seating area in the center, pushing circulation to the perimeter. The partitions that would accomplish this task then became, in typical L.T.L fashion, a surface to exploit for varied effects. Software helped to create a pattern of cutouts that would never repeat but would offer a consistent level of structural strength and visual transparency.

While the digitally driven approach is evident in the pattern, offering pixelated views of students passing by, the selection of bamboo plywood as the material infuses an organic warmth. “The bamboo has a pale orange tone that feels inviting,” Lewis notes. “It also takes finishes very well, and it’s both rigid and renewable.” The same material lines the restroom walls, though there it’s a relief pattern rather than punched-through shapes.

Bright colors are few but striking in the lounge. Red and orange resin reflectors, angled to bounce light from standard fluorescent fixtures, are held aloft by stainless-steel armatures mounted on the ceilings, and reddish-orange wool covers the seats of the slim lounge chairs that gather around tables lightweight enough to be easily rearranged. The round tabletops are either black or white, a return to a restrained palette. Carpet tile, patterned like computer code in pale and charcoal gray, offers a nice complement to the dark slate flooring in the circulation zones.

In a way, the most dramatic feature is simultaneously the most subtle: a double-height wall-mounted topographic model of the state of Wyoming, painted white. “We think it’s one of the largest topographic models out there,” Lewis says. “It takes something familiar and presents it in an unfamiliar way. At first, you’re not sure exactly what you’re seeing.” That’s partly because the 30-foot-square model spans both levels of the lounge, so different parts are visible from downstairs and the mezzanine. Carved out of high-grade MDF, the model has contours as large as 14 inches. (The tallest peaks are hollowed out from behind to reduce weight on the wall.) Because the model is oriented north, sunlight falls across in the same way it falls across Wyoming’s actual mountains and plains.

“We like to create new effects with conventional materials. Sometimes, it’s a matter of emphasis,” Lewis says-in pedagogical mode. His memorable intervention teaches lessons in both geography and design while helping to turn a nondescript passageway into a magnetic hub for educators in-the-making.