It was almost a foregone conclusion. Who else but Randy Brown could conceivably be chosen to transform the studio of the late artist Kent Bellows into a teaching-mentoring workshop for high-school students? The most obvious tie-in was the Omaha location. A more meaningful connection, though, was Brown’s interest in art—illustrated by his PVC-pipe installation at the city’s Lauritzen Gardens, to give just one example. 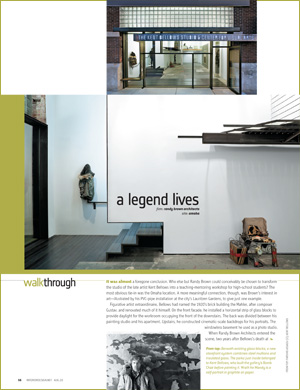 Figurative artist extraordinaire, Bellows had named the 1920’s brick building the Mahler, after composer Gustav, and renovated much of it himself. On the front facade, he installed a horizontal strip of glass blocks to provide daylight for the workroom occupying the front of the downstairs. The back was divided between his painting studio and his apartment. Upstairs, he constructed cinematic-scale backdrops for his portraits. The windowless basement he used as a photo studio.

When Randy Brown Architects entered the scene, two years after Bellows’s death at age 56, the 4,500-square-foot building was unused. It was also almost exactly as he had left it, with his final backdrop in place and a parka hanging on a hook by the front door. Family members, planning the program for the nascent Kent Bellows Studio & Center for Visual Arts, were still working from temporary quarters elsewhere.

“It was a delicate project,” Brown begins. “His sisters had a deep emotional attachment to the building and considered it a museum for Kent. But it also had to have new life with a gallery, teaching space, and a foundation office.” Brown’s dilemma: How much to renovate? How much to keep?

Nonnegotiable were such code issues as moving the entry to where it would be level with the side­walk to comply with the Americans With Disabilities Act. And the big sticking point was money. Projected costs ranged from $500,000 to $1 million, and the foundation had raised only $150,000. Undeterred, Brown tapped students from the University of Nebraska, Kansas State University, and Iowa State University to become his interns. “Using six architecture students, we completed the renovation for that figure in 12 weeks. I oversaw the work, and each student got a stipend of $5,000,” he says. Thus, the project itself evolved into a mentoring endeavor of precisely the kind the foundation was launched to foster.

To make the building more street-friendly, Brown opened the facade by inserting a glass storefront system below the glass blocks, retained for sentimental value. The team expended most of its efforts here and on the front workroom, making it more gallery-esque and wiring it for audiovisual presentations. Hot-rolled steel first appears at the threshold, continues up two steps to the floating staircase, and reappears as the floor of a mezzanine balcony, an observation point that Brown describes as an example of “students thinking with their hands.” Otherwise, flooring downstairs is gray-stained plywood showing the paint splatters and ink marks accrued over the years-all Brown did was add a coat of clear lacquer. He did, however, add a gypsum-board partition to separate the gallery from the stairway. On the opposite wall, a wide door installed by Bellows pivots open to reveal storage for his elaborate backdrops. Brown discovered the last of them still there when he was building out the wall to incorporate a canopy for the mezzanine’s glass-fronted conference area.

The second story and basement, it was decided, would work just fine in their existing state, and the rear apartment is intentionally preserved, museumlike. Likewise, Bellows’s parka was barely touched. It remained on its hook, wrapped in plastic, throughout the renovation.