When Adam Weiss, one of the two cofounders running Scout Capital Management in New York, moved to Northern California to launch a satellite office, he looked for a space rich in character. He found it in downtown Palo Alto, in the form of a 1920’s Spanish colonial building that had previously housed ironworks, a car dealership, an auto-repair shop, and a newspaper. Although the newspaper’s owner had chopped up the 2,500-square-foot interior with a wall and a mezzanine, Weiss’s eye was caught by the 25-foot-high cathedral ceiling—built from redwood, supported by trusses of rough-hewn Douglas fir, and bearing the occasional burn mark. 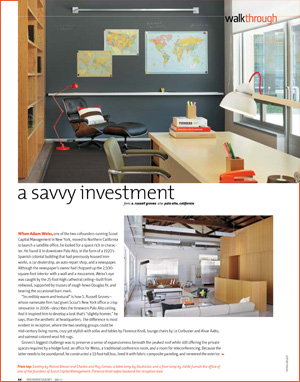 “Incredibly warm and textural” is how S. Russell Groves—whose namesake firm had given Scout’s New York office a crisp renovation in 2006—describes the timeworn Palo Alto ceiling. And it inspired him to develop a look that’s “slightly homier,” he says, than the aesthetic at headquarters. The difference is most evident in reception, where the two seating groups could be mid-century living rooms, cozy yet stylish with sofas and tables by Florence Knoll, lounge chairs by Le Corbusier and Alvar Aalto, and oatmeal-colored wool felt rugs.

Groves’s biggest challenge was to preserve a sense of expansiveness beneath the peaked roof while still offering the private spaces required by a hedge fund: an office for Weiss, a traditional conference room, and a room for teleconferencing. Because the latter needs to be soundproof, he constructed a 13-foot-tall box, lined it with fabric-composite paneling, and veneered the exterior  in bamboo that belies the high-tech environment inside. The placement of the bamboo box, in the middle of the building’s rear wall, created a corner office for Weiss to the right. In front of the box, receptionists share a desk also surfaced in bamboo. A kitchen is built into the left-hand side, along with data and electrical equipment.

“By using a single volume for the programmatic requirements, we didn’t have to carve up the rest of the space,” Groves explains. Partial-height partitions are translucent. The office and conference room, which share one end of the building, are fronted by stacking or folding doors with panels of frosted acrylic. At the opposite end, panels of honeycomb-patterned acrylic screen the area shared by the research analysts’ workstations. As noted by CFO Mike Weiss, no relation to his boss, “Investment research is all about bringing together an informational mosaic. People need openness to talk about ideas, give their opinions.”

Equally free-flowing, the newly poured concrete floor conceals data cables and electrical wires. The return air duct for the HVAC system runs, deferentially, around the perimeter, below the ceiling. Slim linear fixtures cast fluorescent light both down and up, showcasing the ceiling’s redwood and Douglas fir. With an asset like that, why not make it the star of your portfolio?